With over 1.8 million inhabitants, Hamburg is Germany's second largest city. Located at the river Elbe, around 100 km south of the North Sea, its harbour is one of the largest worldwide. While the first permanent settlements in the area are from the 4th century before our era, the city really started to expand after the 12th century. It was one of the first members of the commercial confederation of the Hanseatic League.
Let's explore 8 of its most beautiful staircases and the last 150 years of its history.
Versmannhaus
The Versmannhaus was built between 1910 and 1912 as an office building with shops and a restaurant. The plans for the Neo-Renaissance building were created by local architectural office Rambatz und Jollasse, founded in 1884 by Johann Gottlieb Rambatz and Wilhelm Jollasse. The mosaic at the bottom of the atrium shows a winged horse. 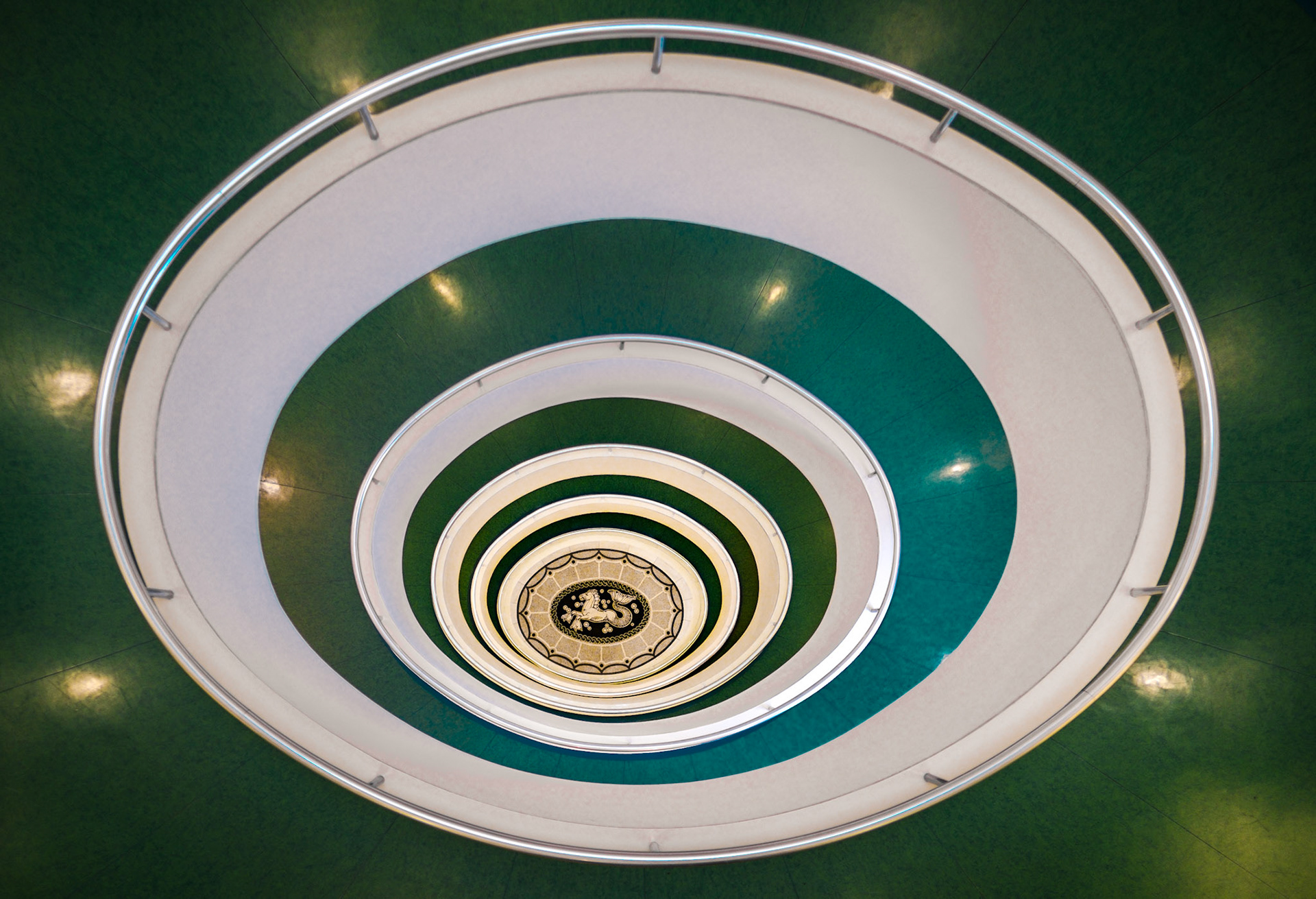 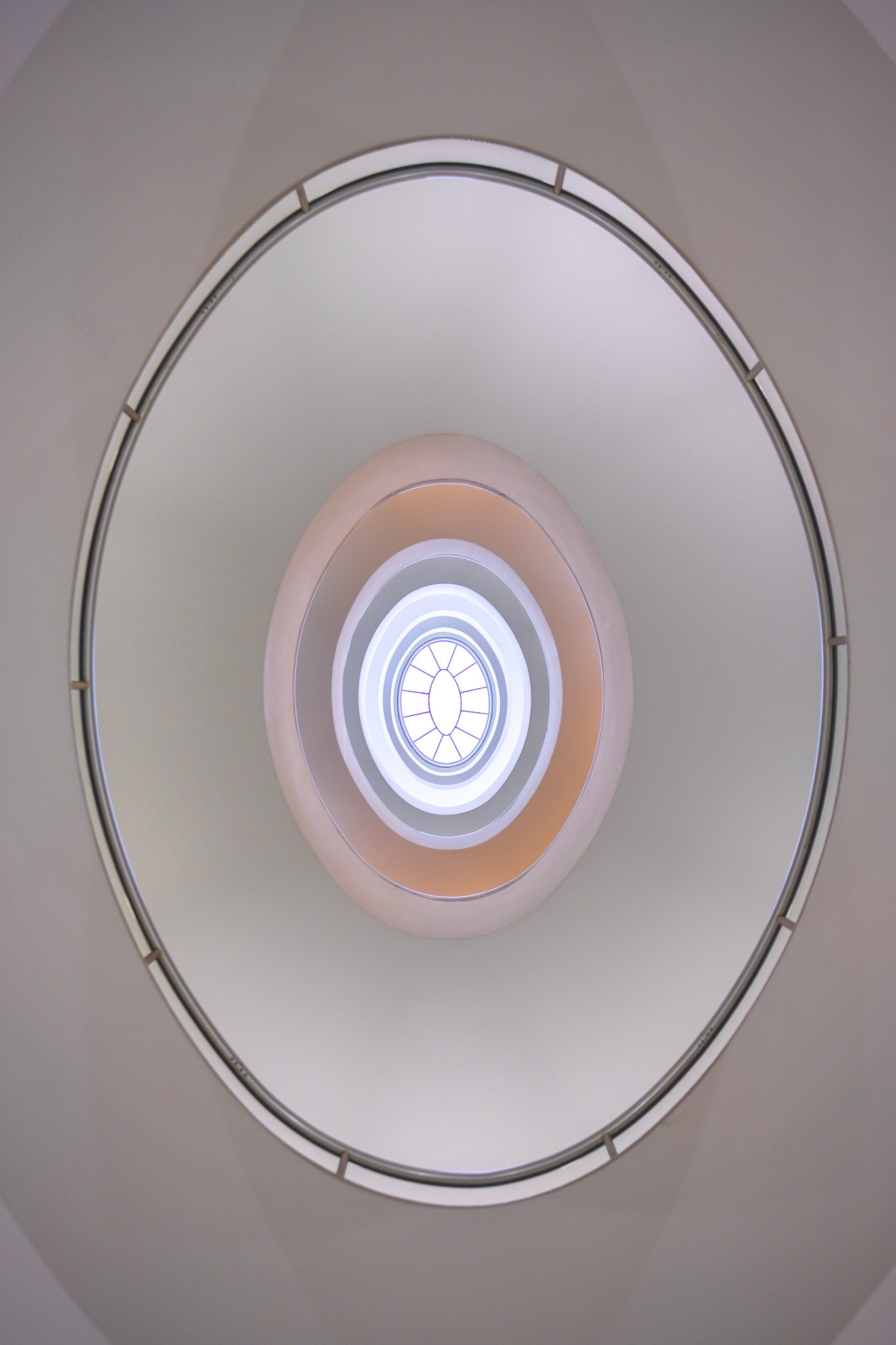 Looking up to the skylight in the Versmannhaus

The building's name is an homage to Johannes Versmann, a Hamburg lawyer and mayor who was the most important Hamburg politician of the last third of the 19th century.
After the foundation of the German Empire, the Kaiserreich in 1871, Hamburg got more and more pressure to be connected to the common customs area. In 1881, Johannes Versmann negotiated the Hamburg customs connection, allowing Hamburg to create a free port area. In the free port area, the historic privilege of Hamburg merchants to store and refine imported goods duty-free continued to apply. The houses on the densely populated Elbe islands Wandrahm and Kehrwieder were demolished. By 1888, it was rebuilt as the Speicherstadt, with six to seven-storey high long brick buildings with Gothic decorative elements serving as warehouses. Until 1927, 24 warehouses with around 300,000 square meters of storage space were built. Thousands of oak pillars serve as their foundation and they each face the water on one side and the road on the other side. General cargo and above all coffee, tea and spices were stored.
Let's not forget though that approximately 20000 residents had to be resettled from Wandrahm and Kehrwieder, leading to unhygienic living conditions that contributed significantly to the outbreak of the cholera epidemic in 1892. After German physician and microbiologist Robert Koch arrived in Hamburg as a representative of the Kaiserreich, he commented "I have never encountered such unhealthy dwellings, plague caves and breeding grounds for every contagious germ as in the so-called gangway quarters that I was shown[...]". Water from the river Elbe was also still used untreated as drinking water since the construction of a filtration plant had been postponed for cost reasons. Between August 1892 and February 1893, almost 17,000 people contracted cholera and over 8,000 died.
Alte Oberpostdirektion
The Alte Oberpostdirektion is located in Hamburg-Neustadt. The building in the Neo-Renaissance style was constructed between 1883 and 1887 as an administration building for the Hamburg postal service. The plans were by August Kind and Julius Raschdorf, who would, 10 years later, also draw the plans for his most famous work: the Berliner Dom. At the time it was built, the over 300m long building was the largest administration building for the postal service in all of Germany. The Alt Oberpostdirektion is decorated with several allegorical sculptures designed by Engelbert Peiffer referring to the postal service, the telephone and the telegraph.
The building was used by the postal service for over 100 years. Starting in 1949, it was also home to the Postal Museum, which later became the Museum for Communication. After 2011, the building was renovated and converted for use as a shopping and medical care center. 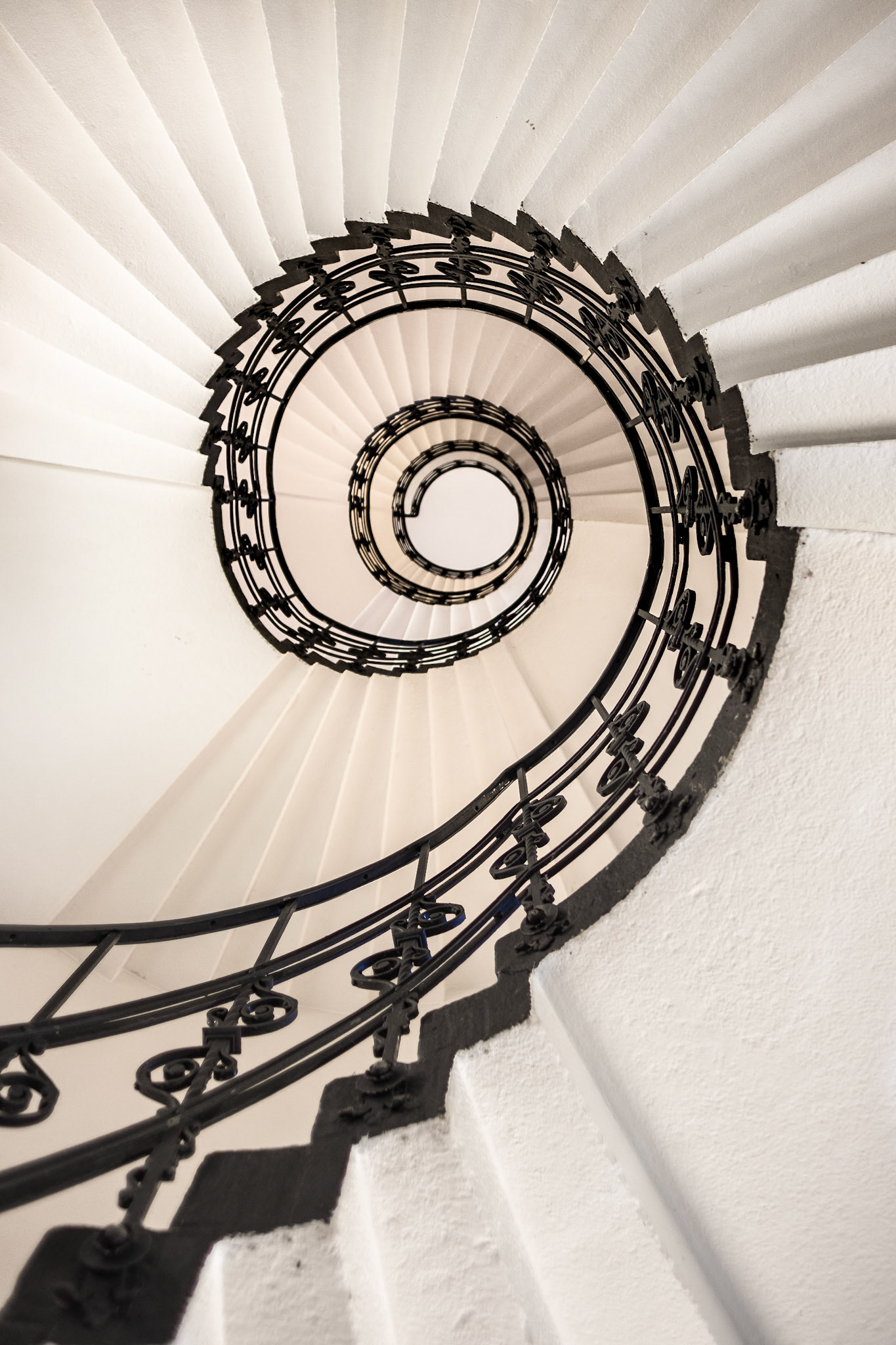 Spiral staircase inside the Alte Oberpostdirektion

In 1887, the same year the Alte Oberpostdirektion was completed, Hamburg's pneumatic post started its operation. At the beginning of World War II the pneumatic tube network had reached a length of 43 km and transported around 3,000 telegrams and express letters every day. Contrary to the worldwide trend towards the closure of pneumatic tube systems starting in the 1950s, Hamburg started a pilot project of a large pneumatic tube system with a diameter of 45cm and using 1.6m long trolleys in the 1960s. It was supposed to solve the issue of reliably and rapidly transporting mail between the postal offices at a time where the number of individual cars in the city was rapidly increasing. The new system made it possible to transport items in 90 to 180 seconds, which would have taken more than half an hour by postal bus. Since the vibrations from road traffic repeatedly damaged the system though, operations were discontinued in 1976.
Brahms Kontor
The Brahms Kontor is a building complex in Hamburg Neustadt. It was built between 1903 and 1931 in three phases. It started with a 5-story building in 1903/1904 to plans by Lundt & Kallmorgen. It was then modified to an 8-story building between 1919 and 1921 to plans by Ferdinand Sckopp and Wilhelm Vortmann. They also designed the 15-story high extension that was constructed between 1927 and 1931. Upon completion, it was the tallest non-religious building in Hamburg. It contains stunning Art-deco elements. 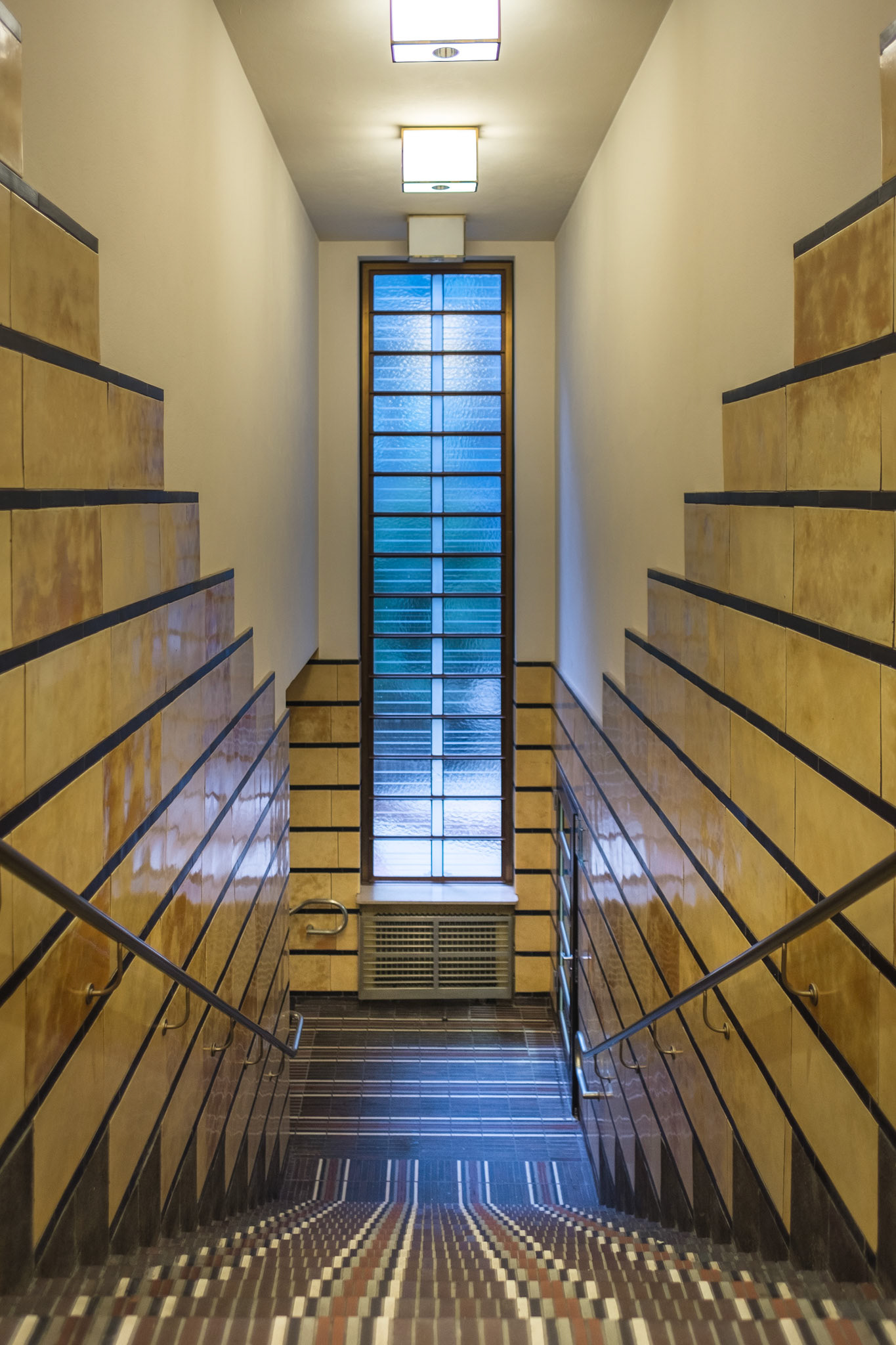 Staircase inside the Brahms Kontor 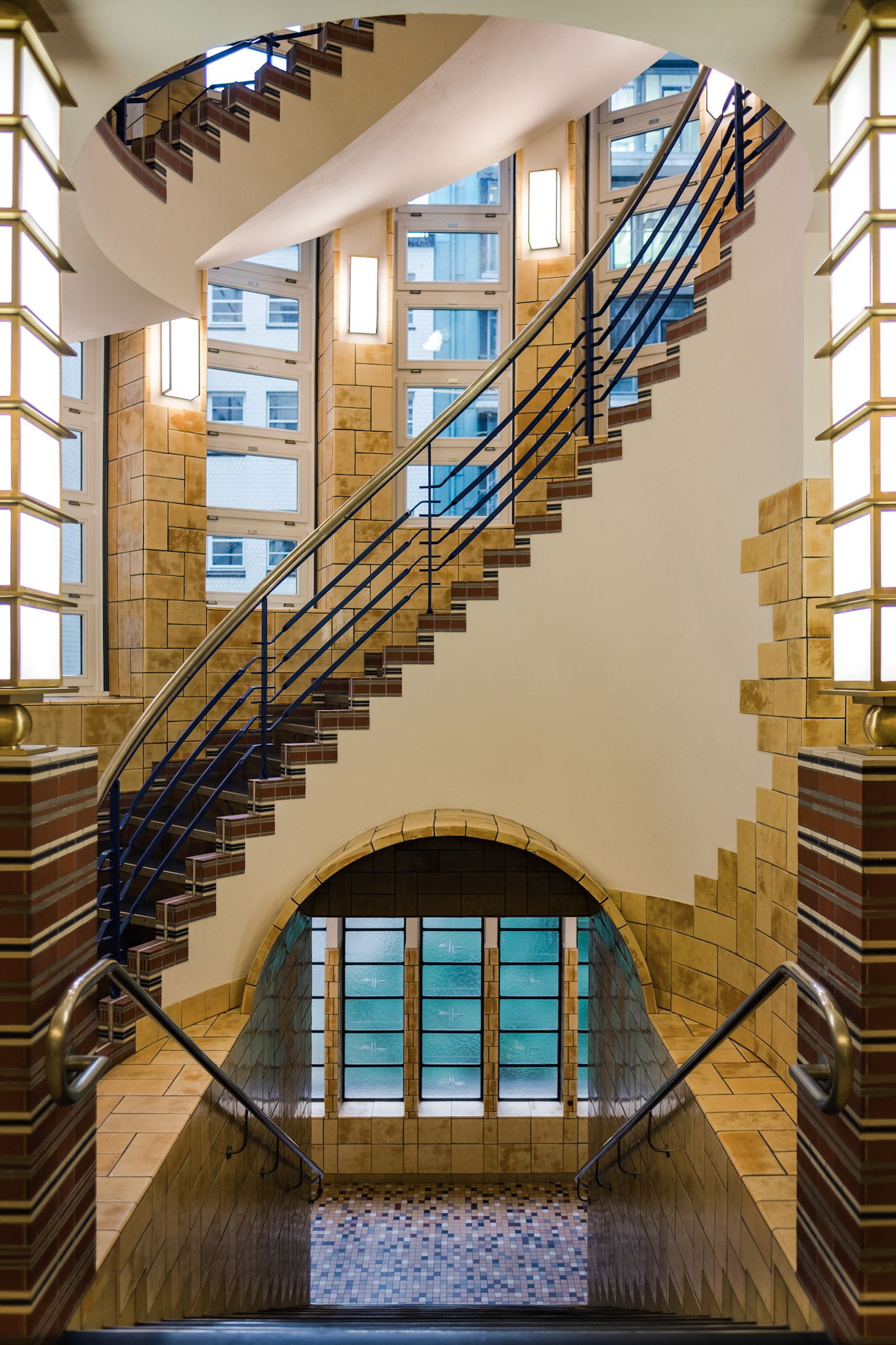 Start of the spiral staircase 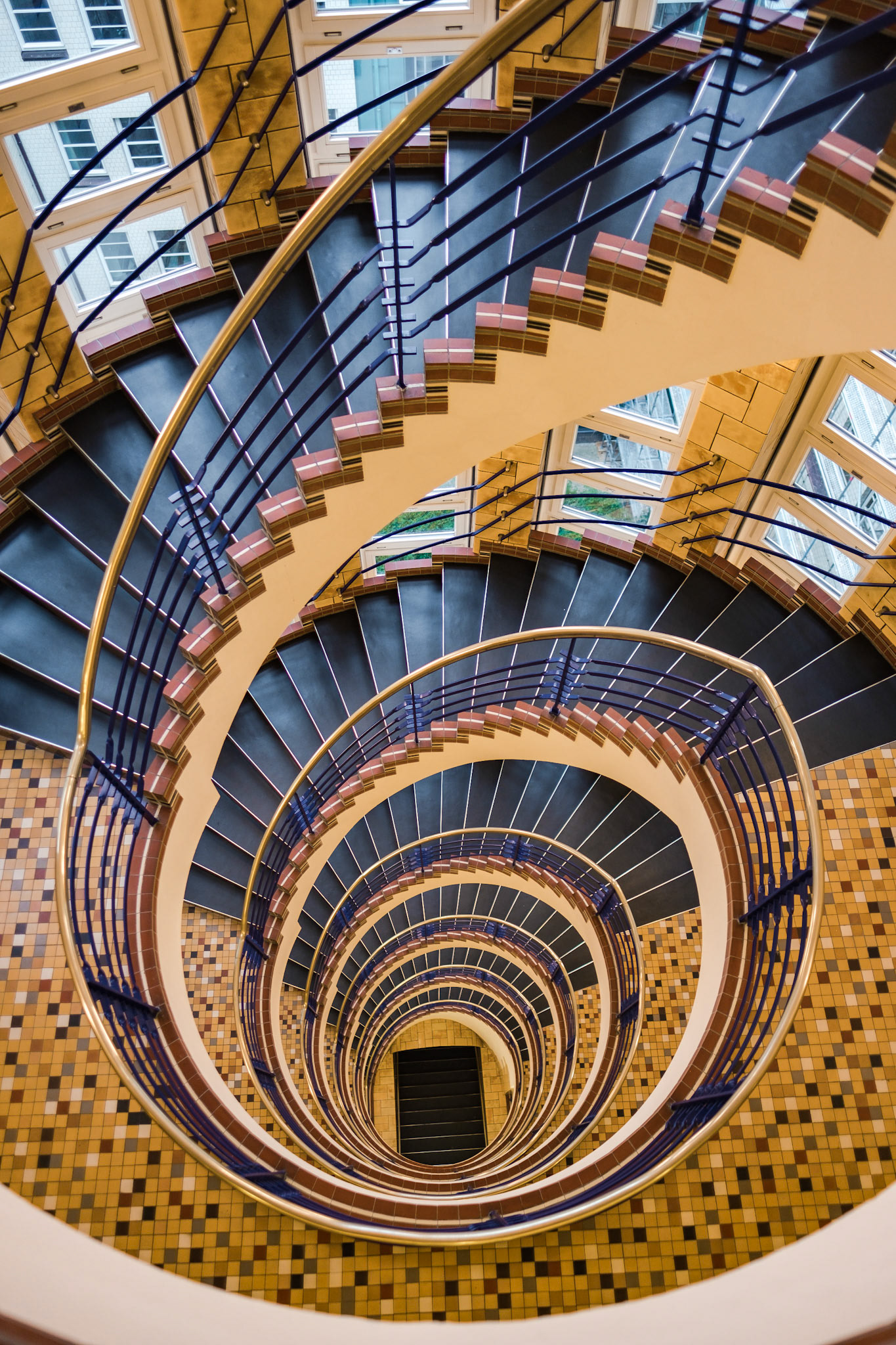 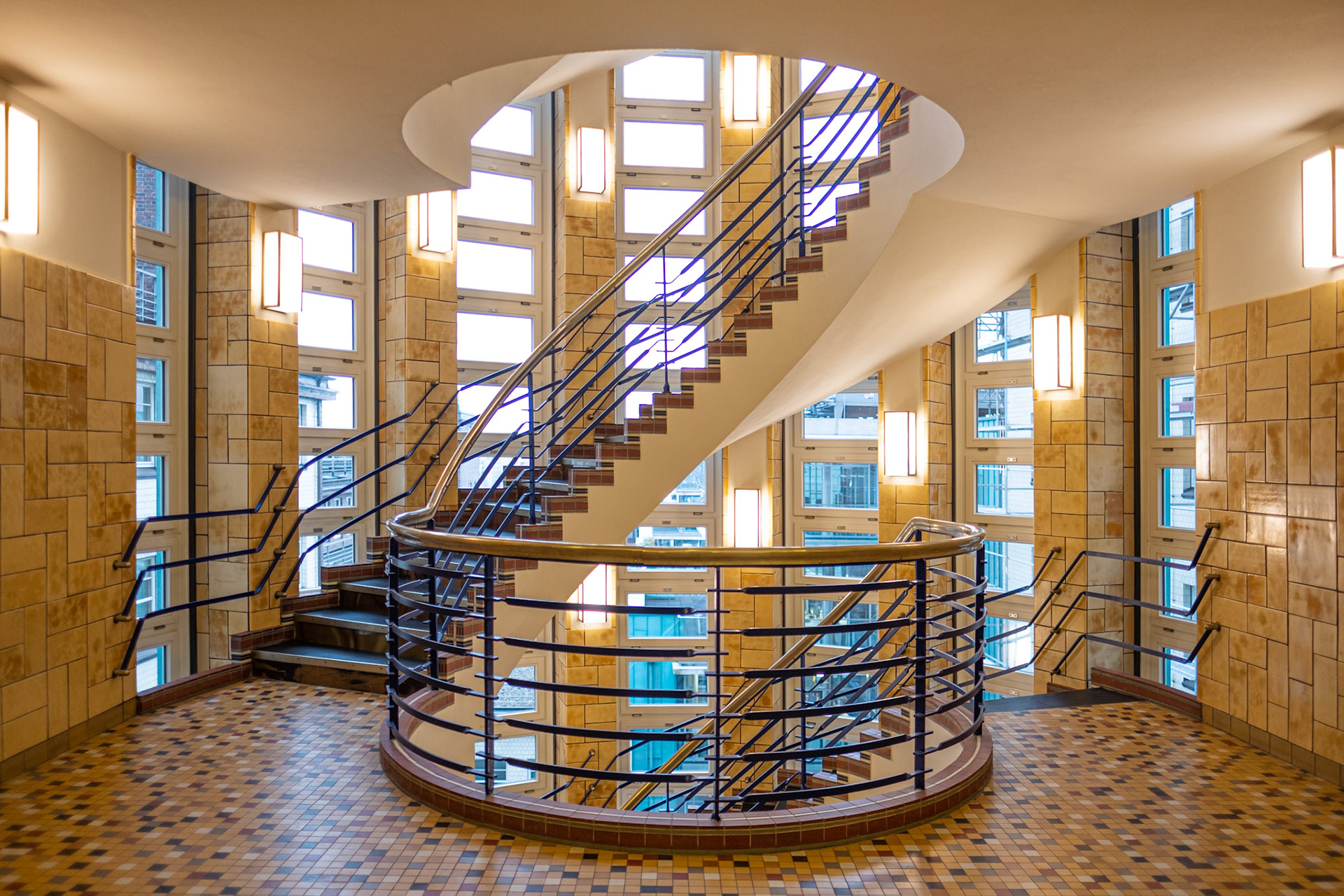 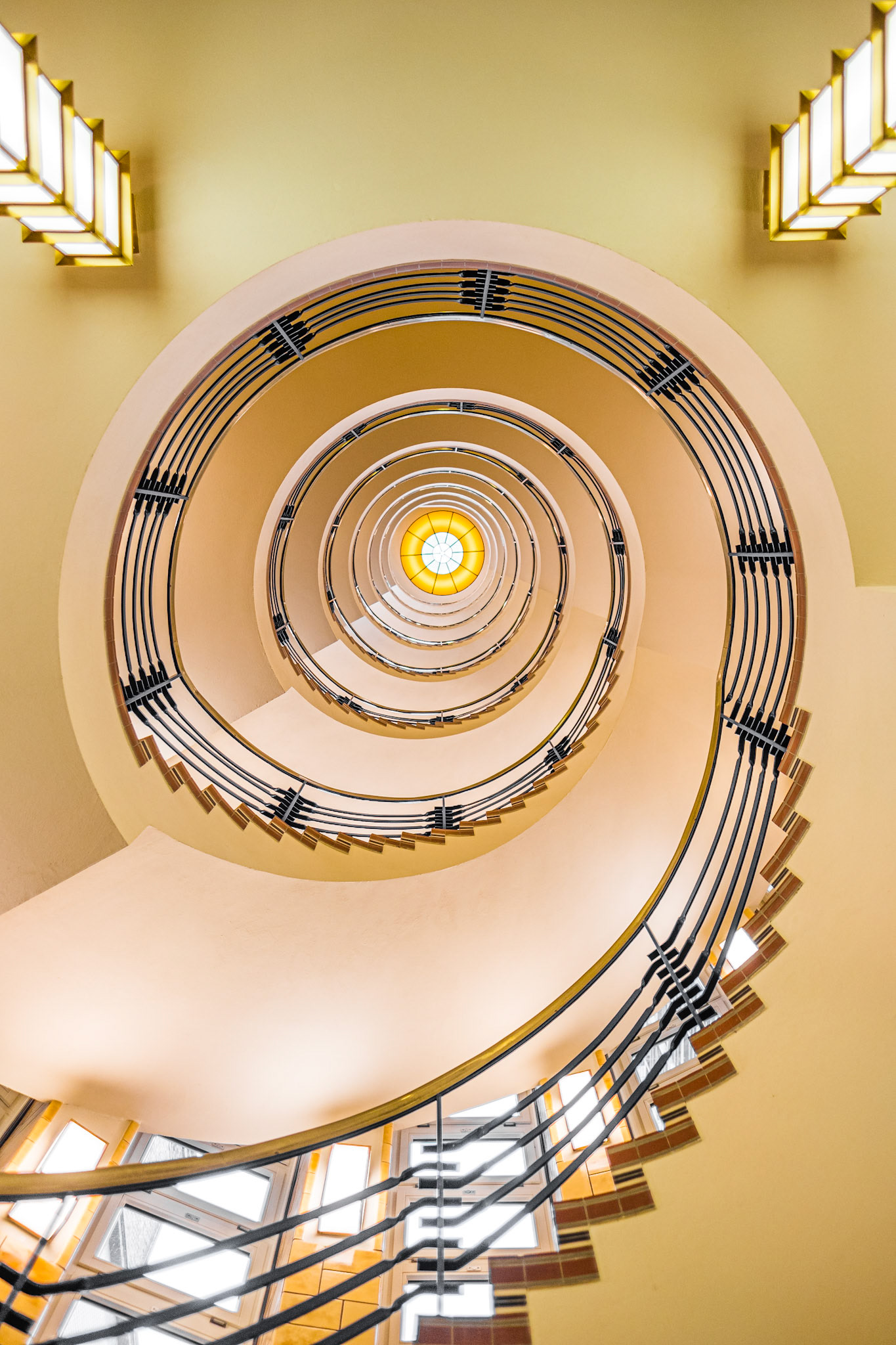 The building complex was initially called Haus des Deutschnationalen Handlungsgehilfen-Verbandes. The German National Association of Commercial Employees was founded in 1893 in Hamburg as a labour union for commercial employees. From its foundation, it had an anti-semitic, anti-liberal and anti-feminist ideology. By 1932, it had over 400,000 members.
Only in 2005 did the building receive its current name, Brahms Kontor, in homage to composer Johannes Brahms who was born in Hamburg in 1833. Although he lived most of his life in Vienna, he was named an honorary citizen of Hamburg in 1889.
Esplanadebau
The Esplanadebau was built in 1913 as a branch of the Adlerwerke, a Frankfurt car manufacturer. As for the Versmannhaus, its plans were by the Rambatz und Jolasse architectural practice. It is one of the many Kontorhäuser they designed. 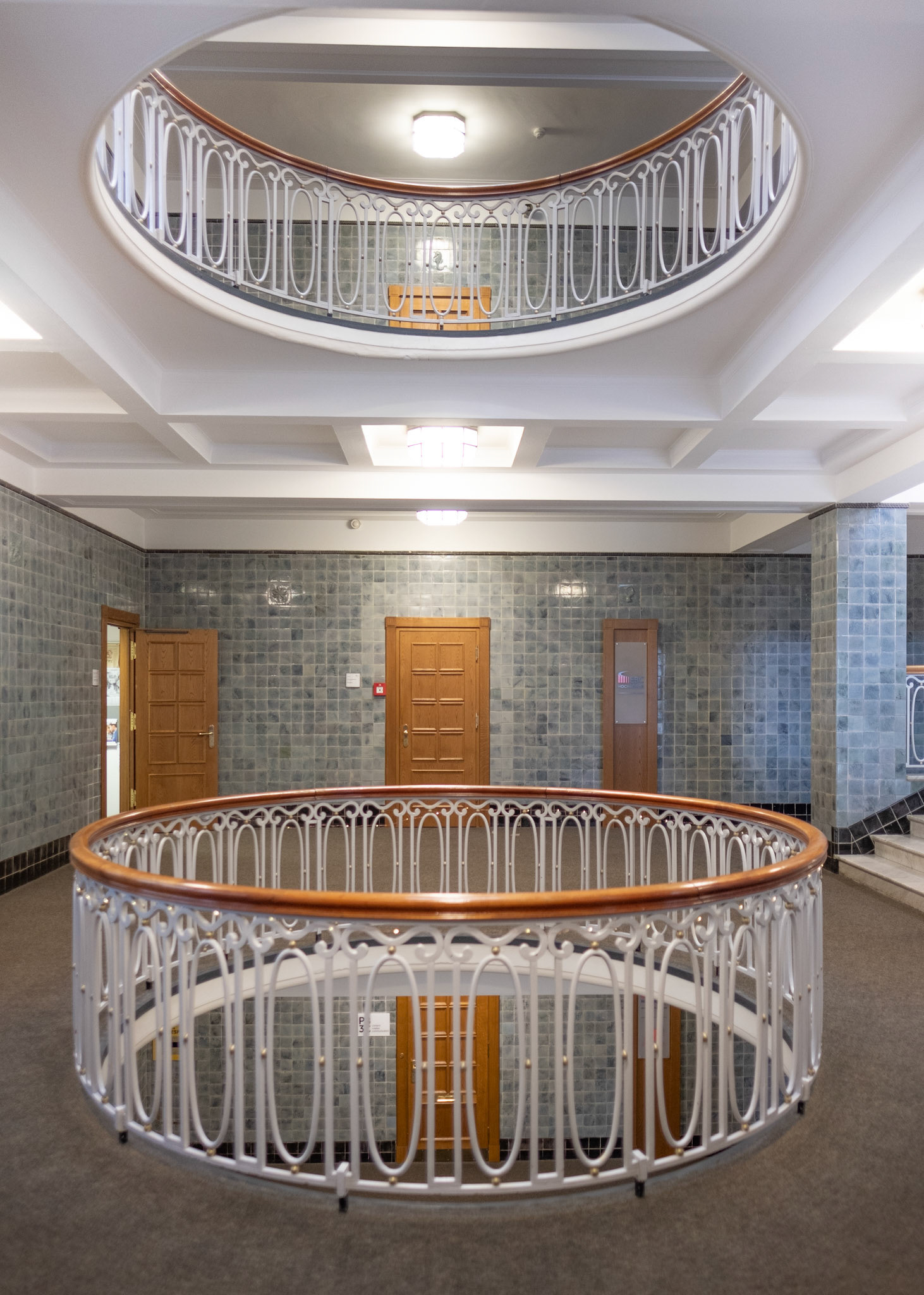 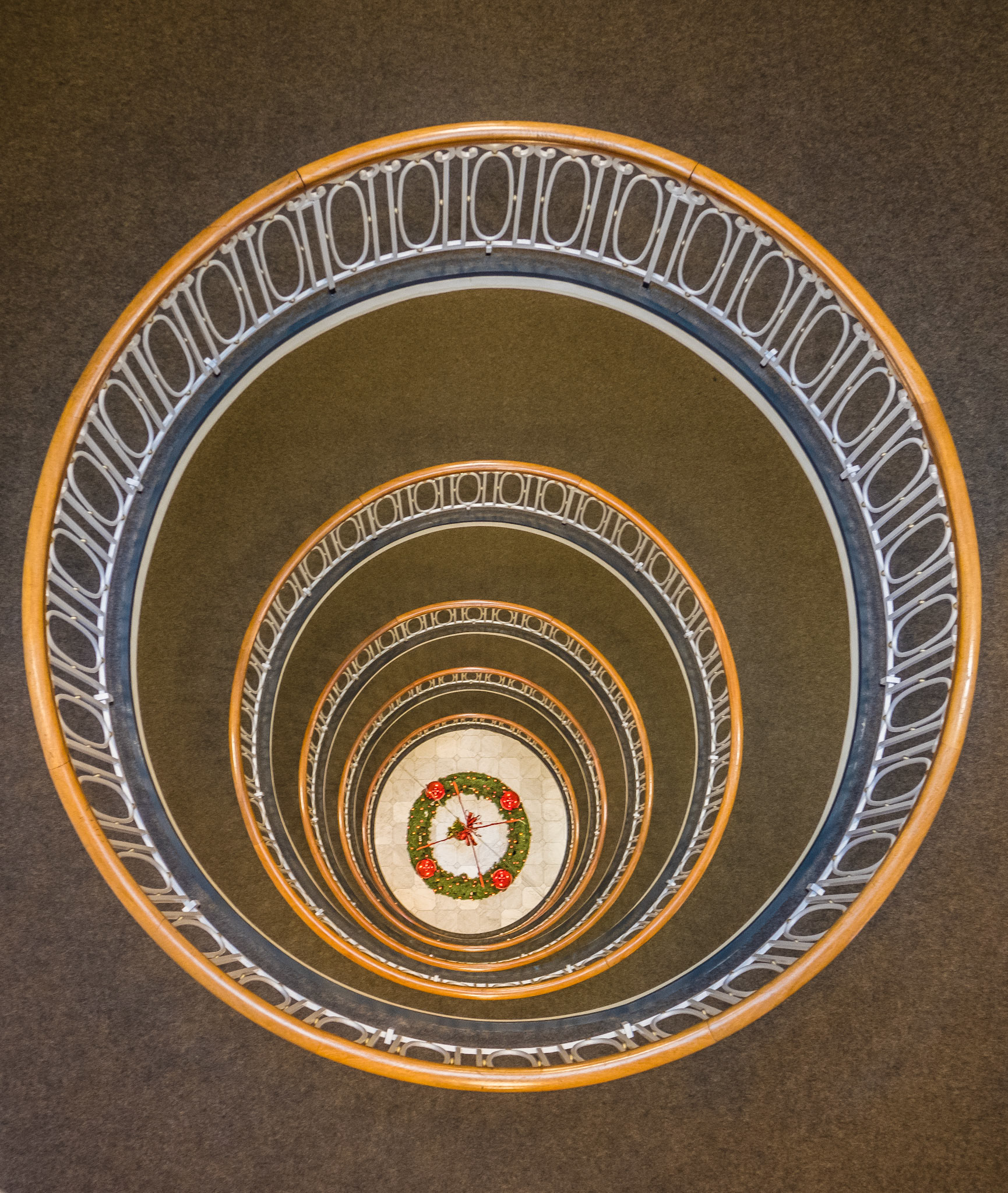 Looking down the atrium inside the Esplanadebau

Kontorhäuser were designed and built between the end of the 19th century and World War II as office buildings for trading companies, physically separating trading from storing goods. This separation was crucial in Hamburg with the creation of the Speicherstadt and its free port area. Typically, Kontorhäuser were not designed for use by a single company, but to be rented out to multiple tenants. The Dovenhof, built in Hamburg in 1886, was the prototype of this type of building.
Meßberghof
The Meßberghof was built between 1922 and 1924 to plans by architects Hans und Oskar Gerson. It is located inside the Kontorhausviertel, built between World War I and World War II in the south-east of Hamburg. The buildings in the Kontorhausviertel are unique testimonies to the Brick Expressionism of the 1920s and the New Objectivity. They were built in skeleton construction, largely avoiding load-bearing interior walls and hence offering flexible floor plans. Since 2015, the Speicherstadt and Kontorhausviertel have UNESCO World Heritage status.
In addition to its spiral staircase, the Meßberghof also featured a paternoster lift, allowing people to quickly move from one floor to another. 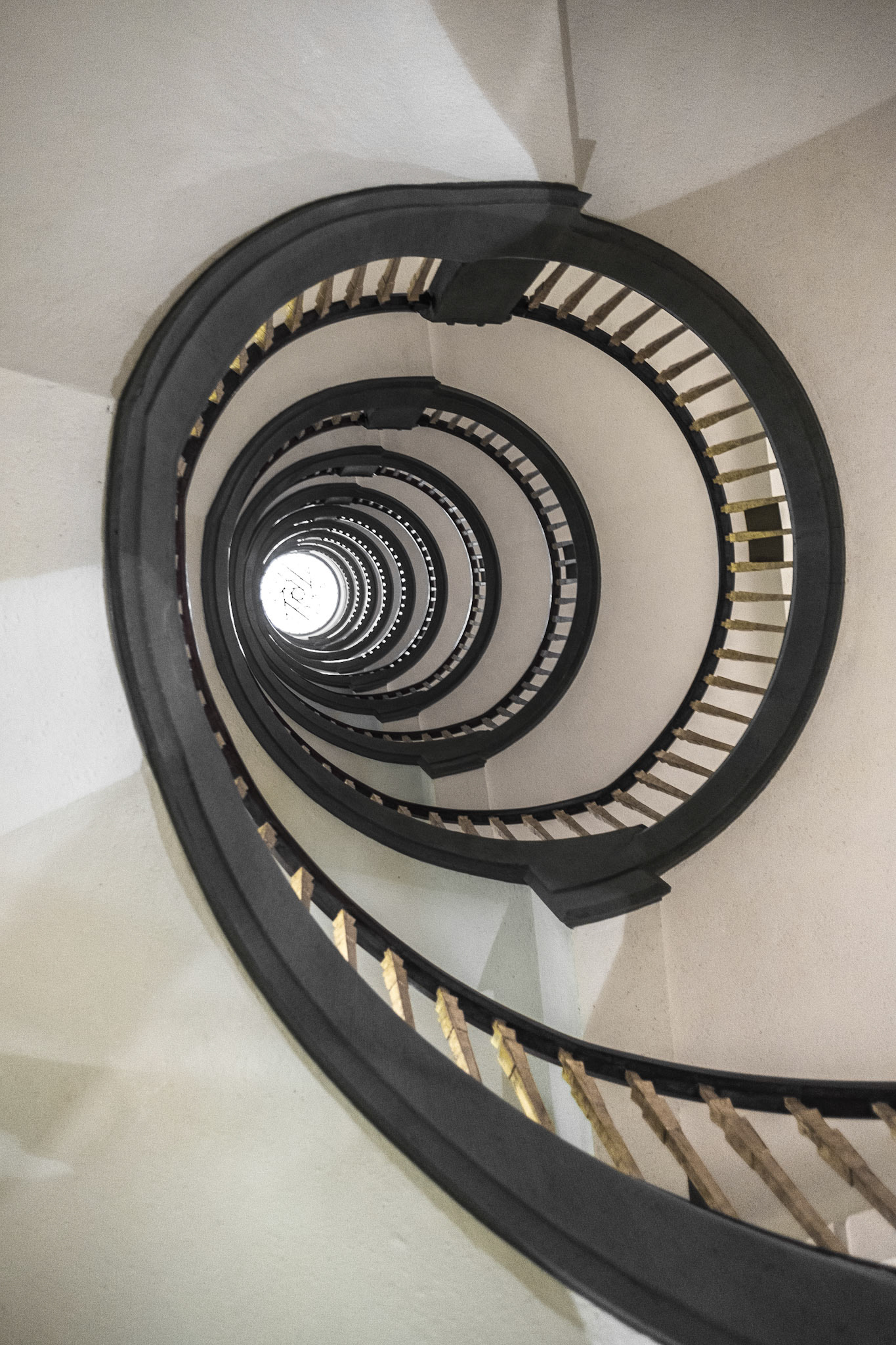 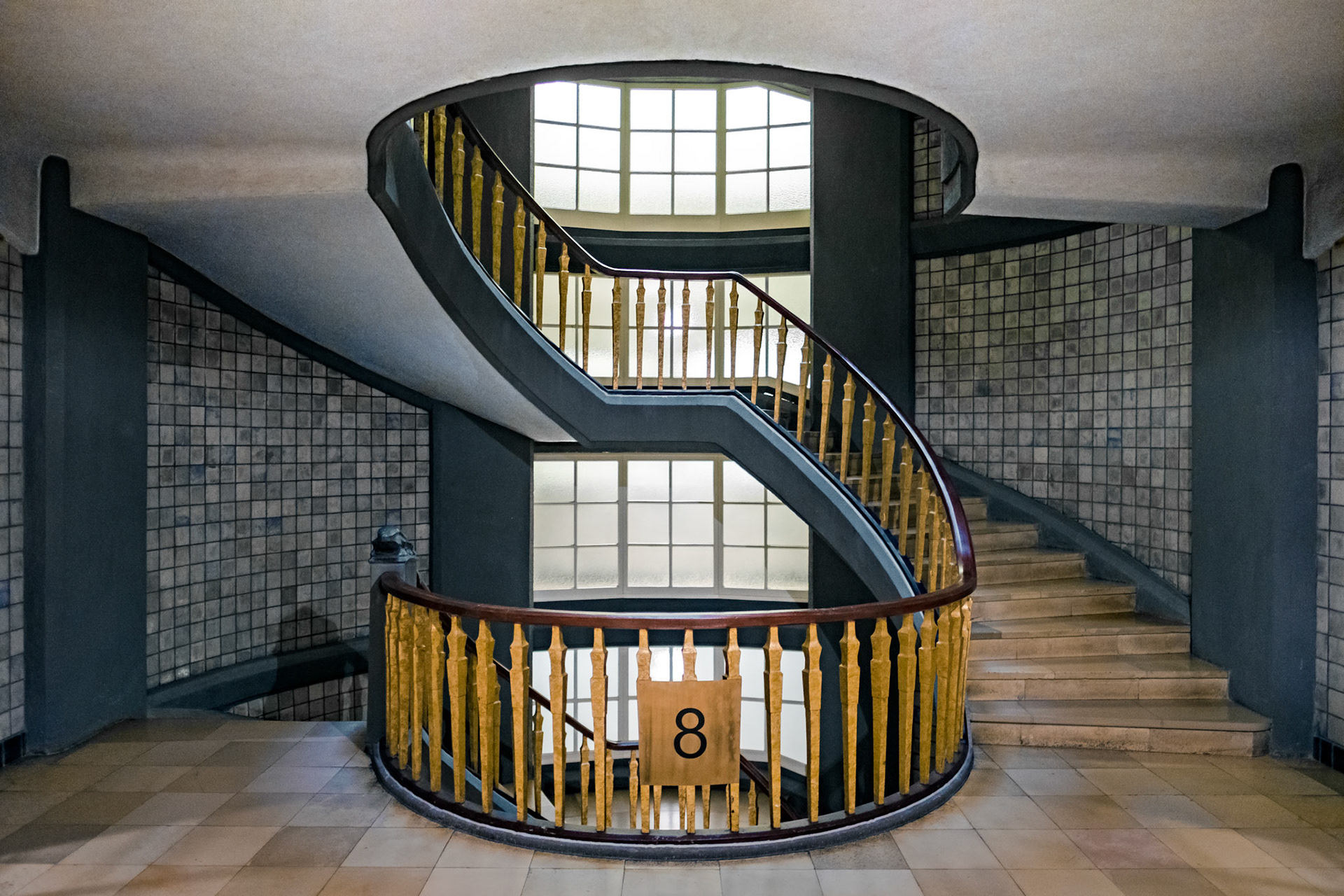 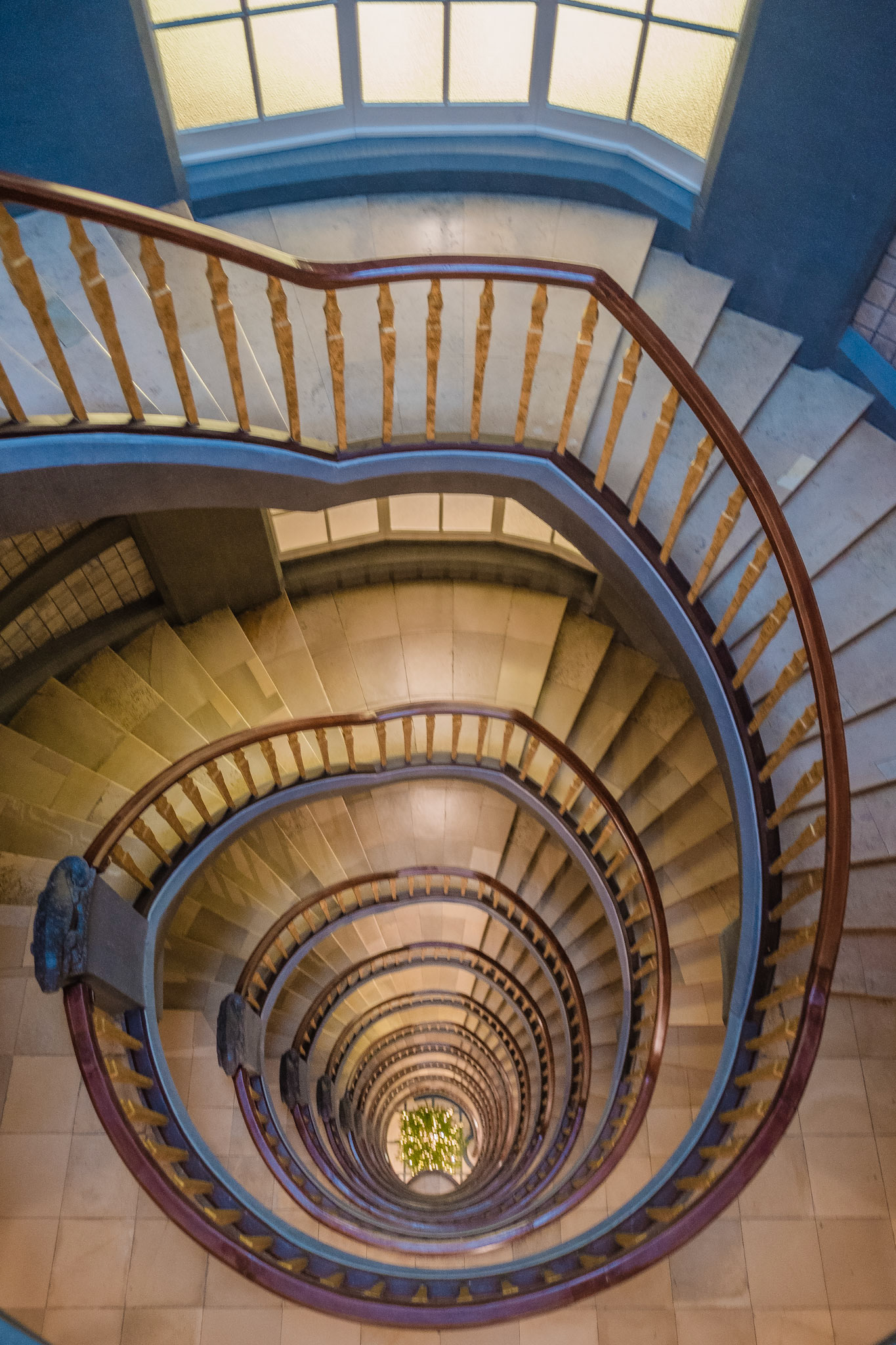 Looking down the staircase inside the Meßberghof

The Meßberghof was initially called Ballin Haus after the Hamburg citizen Albert Ballin who died in 1918. Albert Ballin was the general director of Hamburg-Amerikanische Packetfahrt-Actien-Gesellschaft (HAPAG) which had become the world's largest shipping company by 1914. He's also the inventor of the cruise as we know it today! Since the transatlantic passages on his ships were booked significantly less in winter due to bad weather, Ballin decided in 1891 to send one of his ships on an "educational and pleasure trip" in the Mediterranean. It was a huge success and the "cruise" was born !
Unfortunately, since Albert Ballin was of Jewish descent, the building was renamed in 1938 to Meßberghof and the bust of Ballin in the entrance hall was destroyed. Since 1929, the Tesch & Stabenow company was also one of the numerous tenants in the Meßberghof. Tesch & Stabenow supplied the toxic Zyklon B to concentration camps and its owner, Bruno Tesch, was executed in 1946.
Sprinkenhof
The Sprinkenhof is also located inside Hamburg's Kontorhaus district. The nine-story high office building was built in three phases between 1927 and 1943 to plans by Hans und Oskar Gerson und Fritz Höger. Lozenge-shaped painted brick and regular ornaments with symbols of trade and crafts by Ludwig Kunstmann adorn the facade. Upon completion, it was the largest office building in Hamburg, enclosing three inner courtyards. It was also the most modern one with one of the first underground car parks. 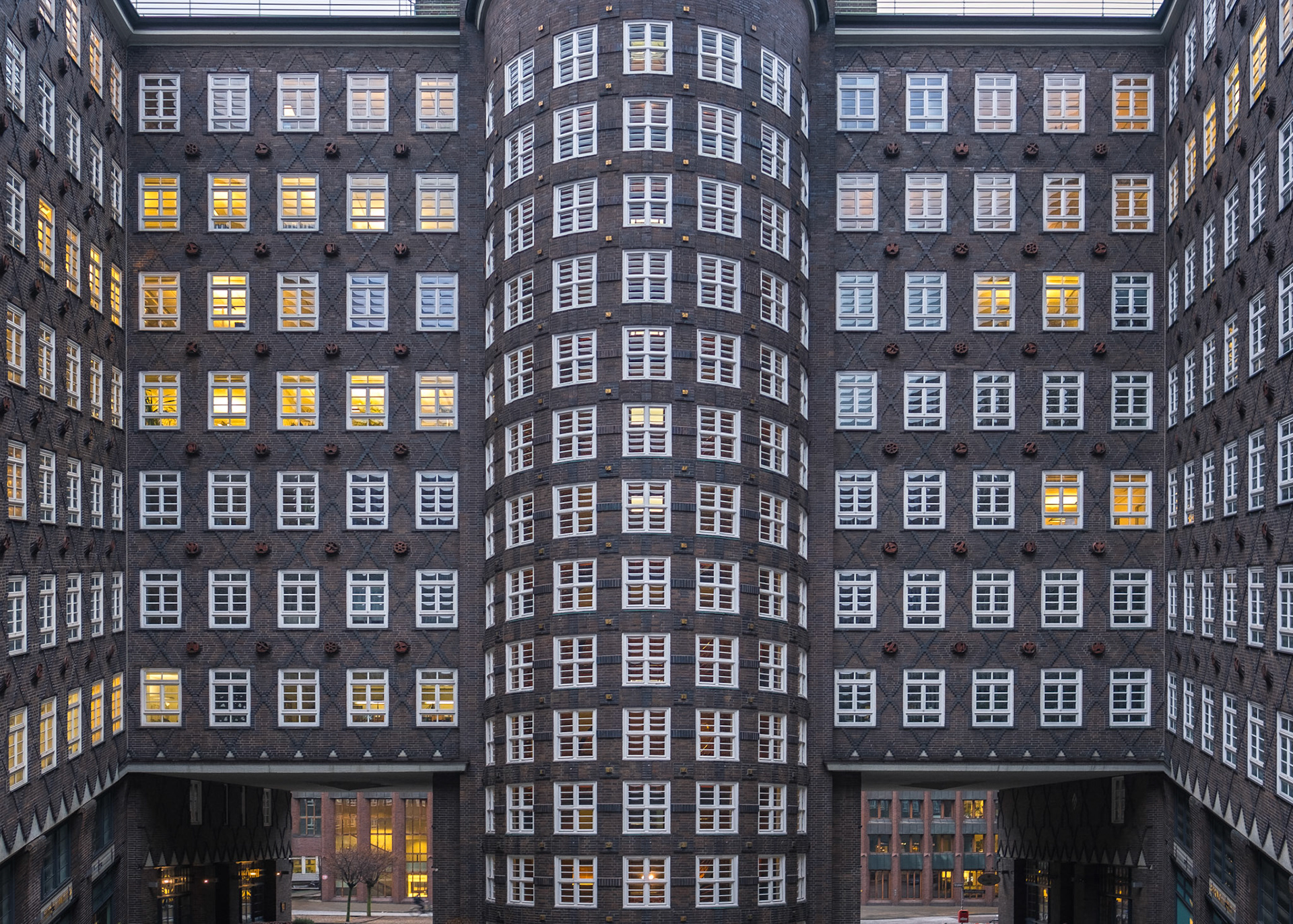 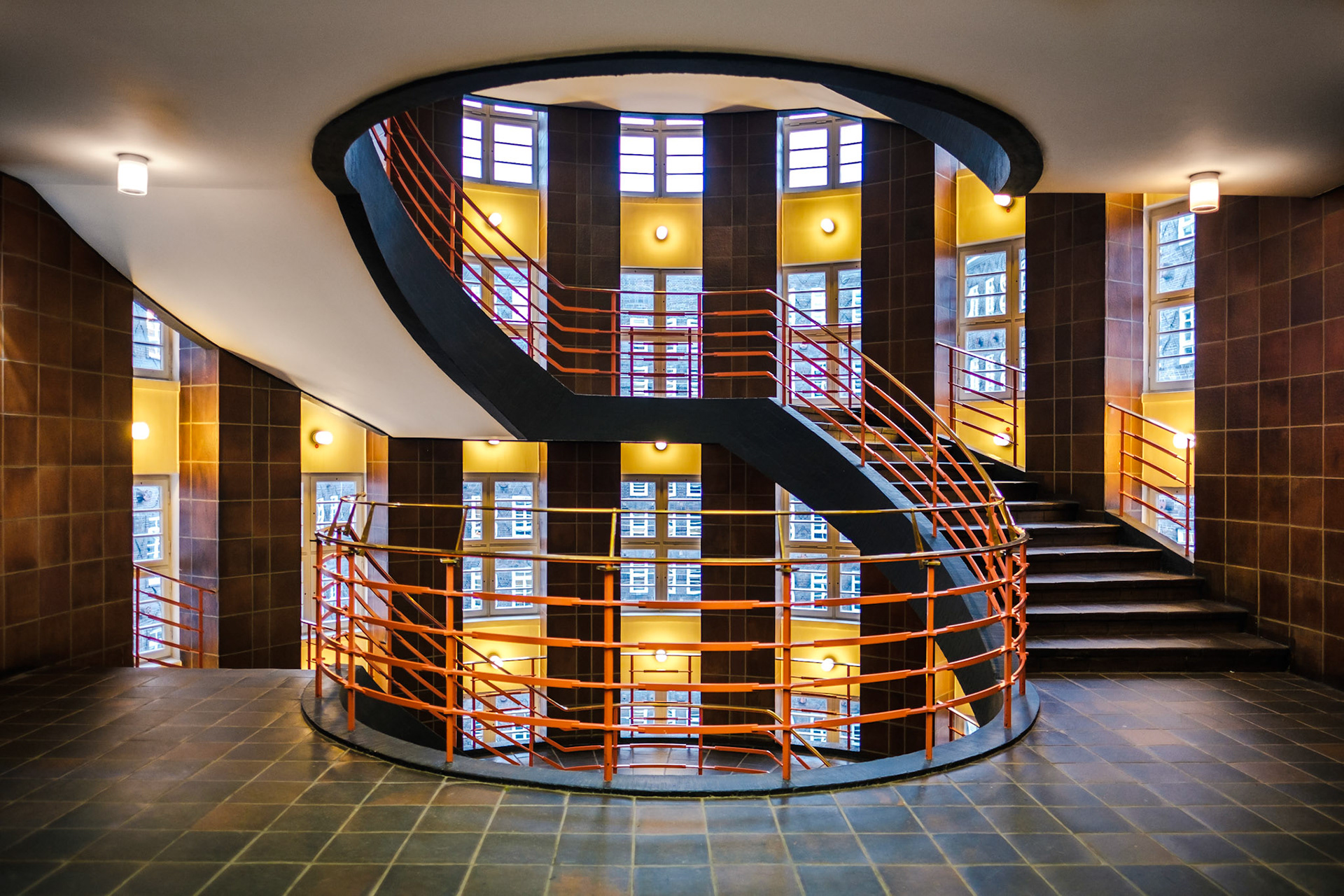 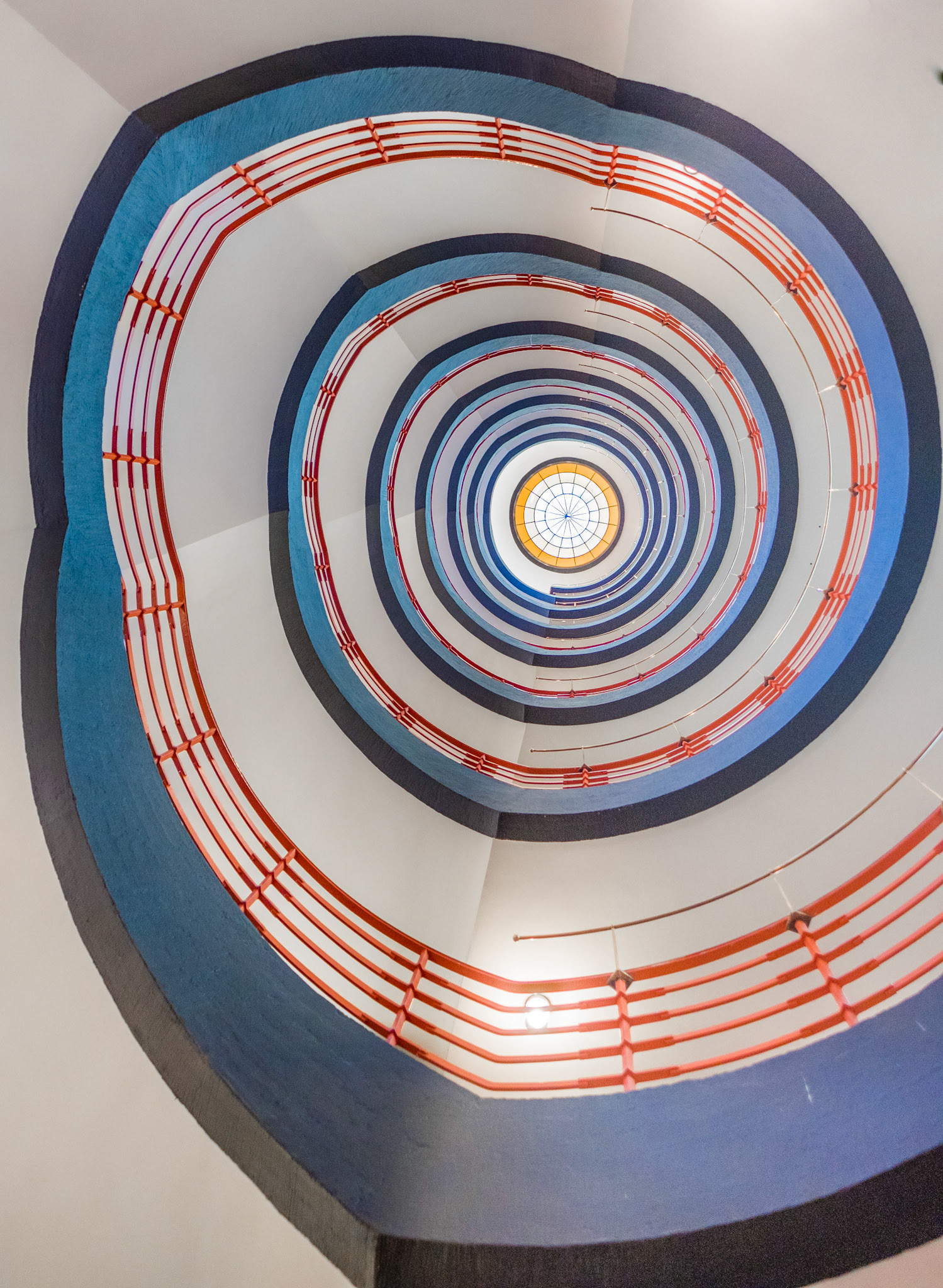 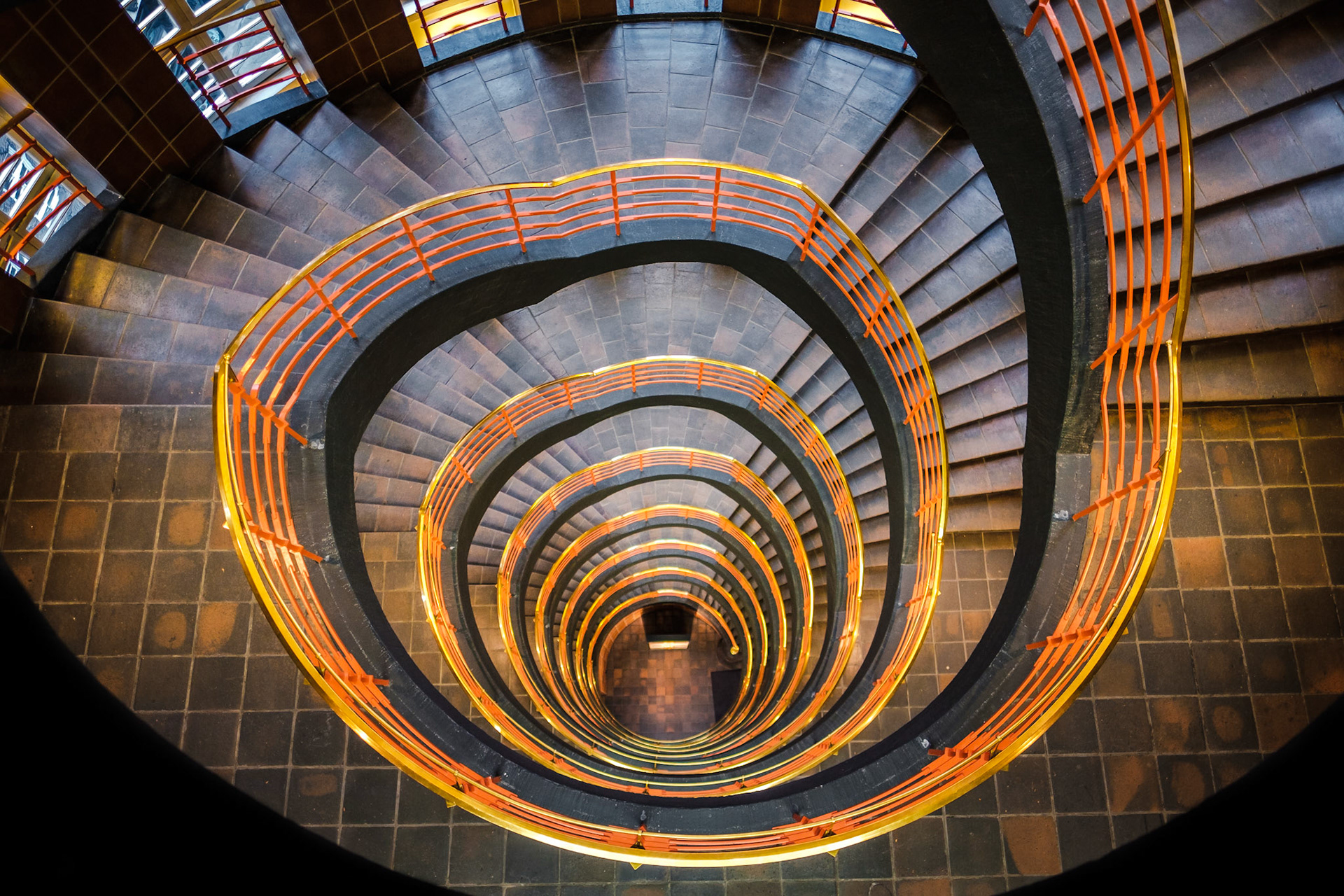 Looking down the staircase inside the Sprinkenhof

In order to manage the leases of the new office building, the two construction companies of the Sprinkenhof, Philipp Holzmann AG and Friedrich Holst, founded the company Altstadt AG, which, in 1935, became the property of the city of Hamburg and was renamed into Sprinkenhof AG. After 1950, the city transferred all of its commercially rented properties to Sprinkenhof AG for management. Sprinkenhof GmbH is now managing a total of almost 2,000 municipal properties with over 5,000 leases.
Gehrckens Hof
The Gehrckens Hof was built in 1956/57 to plans by Wunsch & Mollenhauer for the shipping company H. M. Gehrckens. Its staircase is a great example of the architecture and design language of the 1950s with the deviation from rigid symmetry and the adoption of free forms. 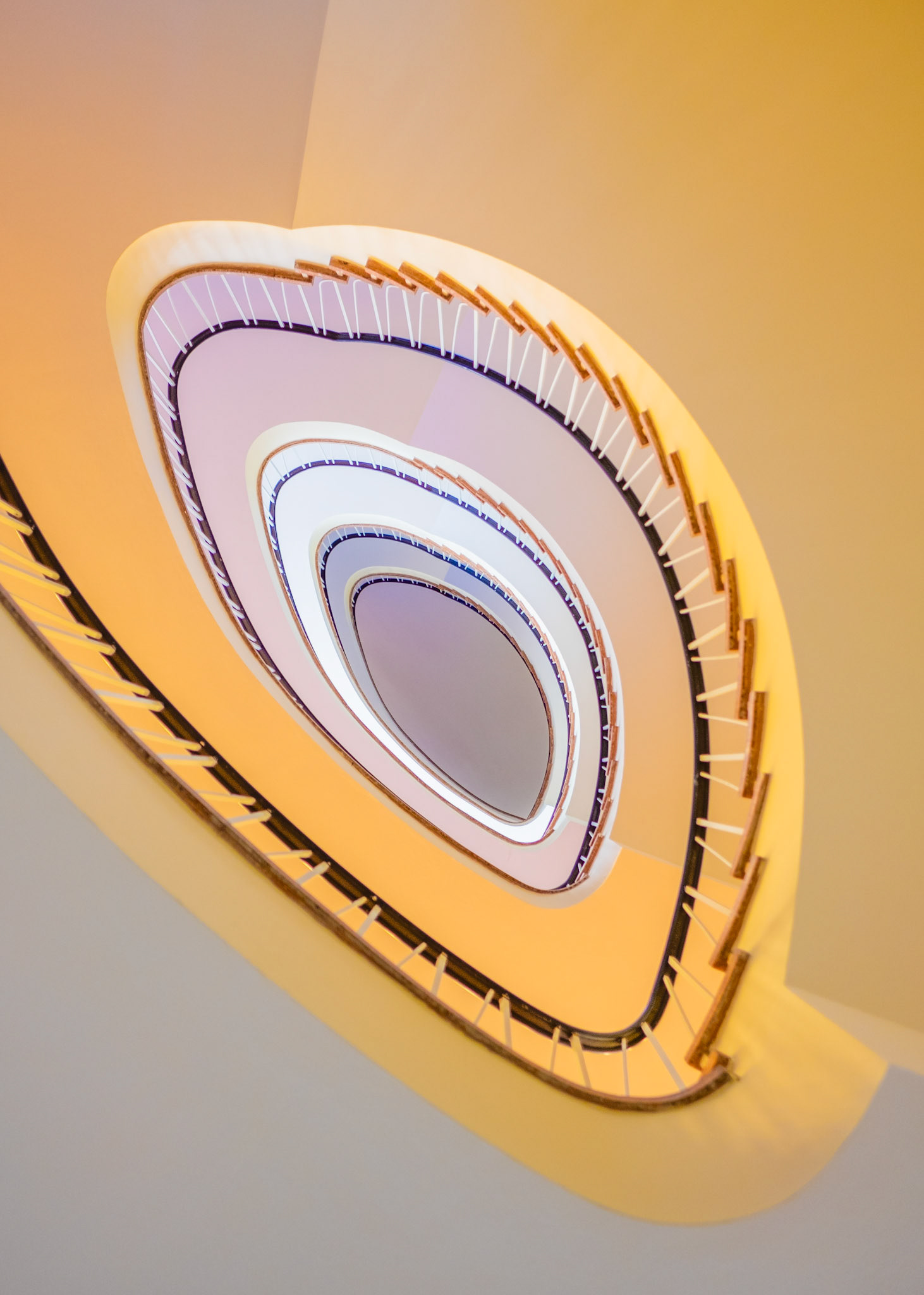 H.M. Gehrckens was founded in 1830 and was one of the main shipping companies to establish liner shipping between Germany, Finland and Sweden towards the end of the 19th century. Two of its ships in particular marked history. The merchant ship Söderhamn was built for H.M. Gehrckens in 1899. After World War I, the freighter had to be handed over to Great Britain, but was bought back in 1921. At the end of World War II, it was used to rescue refugees: in nine voyages between January and April 1945, it brought almost 20,000 refugees from East Prussia and Pomerania across the Baltic Sea. In May 1945, the Söderhamn was confiscated in Kiel by the British Ministry of War Transport, but then restored to Gehrckens in 1946, at which point it was, for several years, the largest ship in the German merchant fleet. Three years later, H. M. Gehrckens received the confirmation number "MSB/Ship 1" from the Military Security Board, i.e. the first permission after the end of the war for a new ship to be built in Germany. The new merchant ship, the "Brook" was delivered to Gehrckens in 1950.
Zürichhaus
The Zürichhaus was constructed between 1989 and 1992 to plans by local architects Gerkan, Marg and Partners (gmp) for the insurance company Zürich. The design of the halls with water basins and trees is by Hinnerk Wehberg, Gustav Lange, Gundolf Eppinger and Wieland Schmidtke.
gmp, founded in 1965 by Meinhard von Gerkan and Volkwin Marg is today Germany's largest architectural office. Among its many realisations are the Berlin-Tegel airport in 1974, the renovation of the Berlin Olympic Stadium in 2004 and the Elbbrücken subway station in Hamburg. gmp is considered the most successful European architecture office in China: it has already created around 100 structures in China and dozens more are at the planning stage. 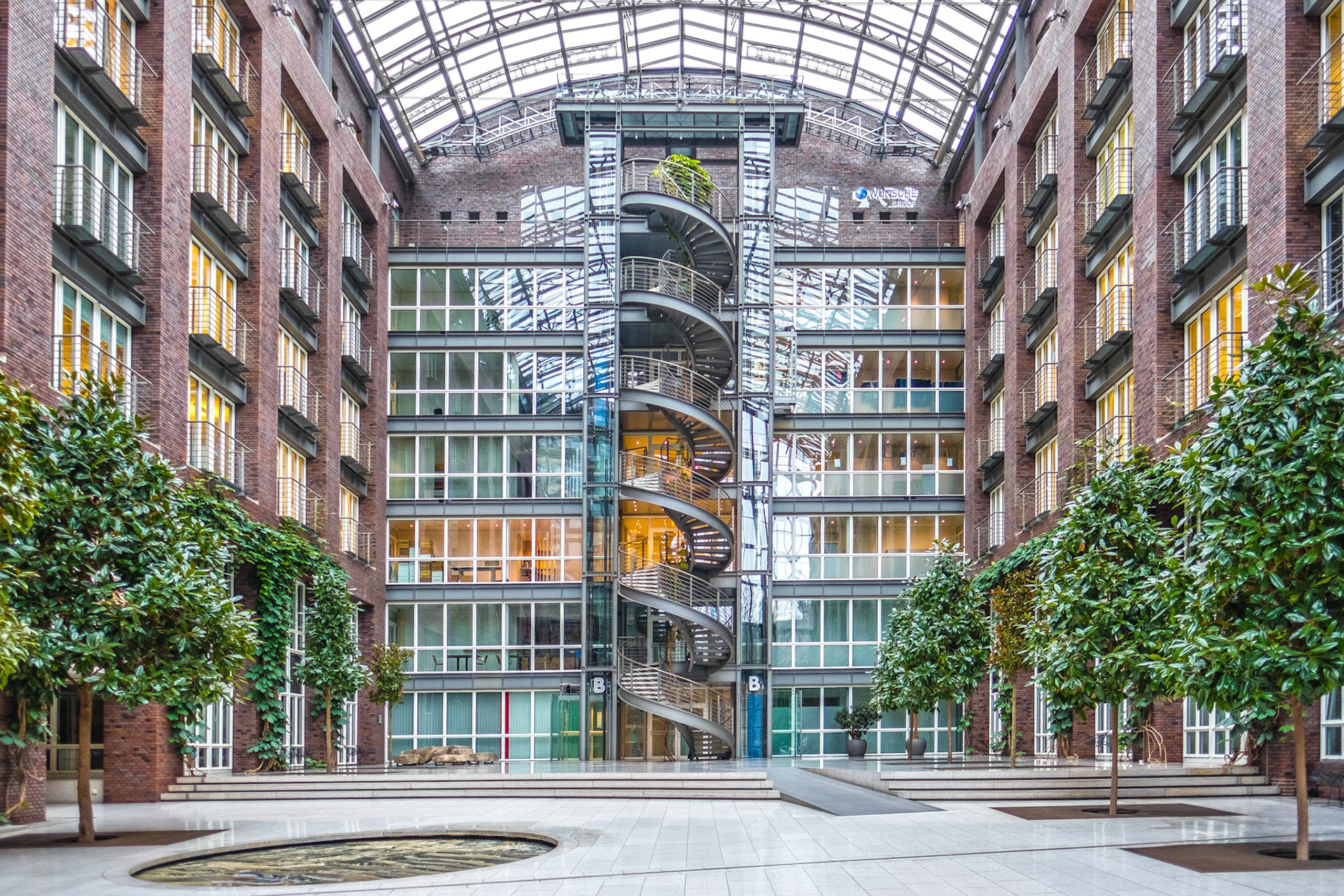 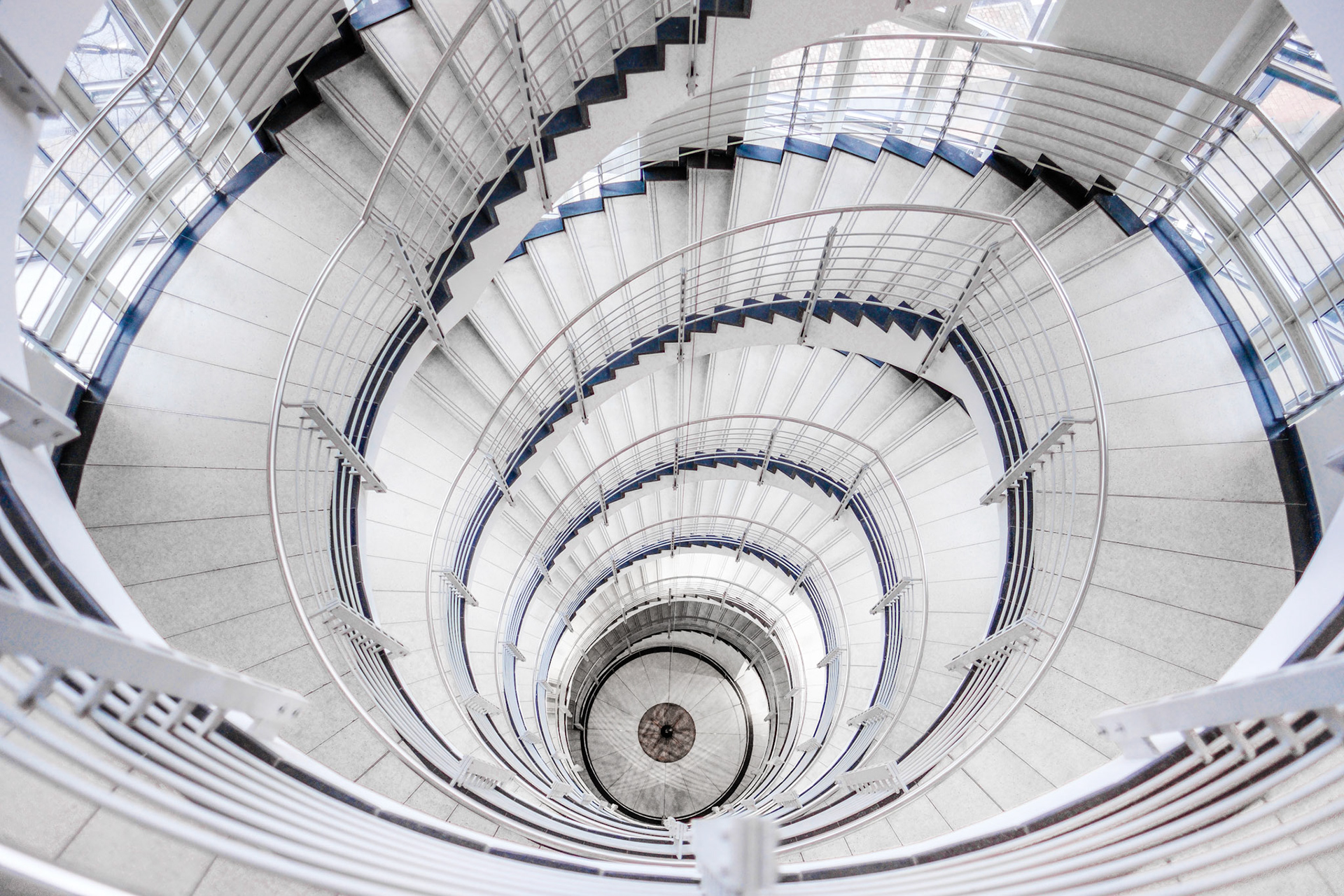 Looking down the spiral staircase inside the Zürichhaus 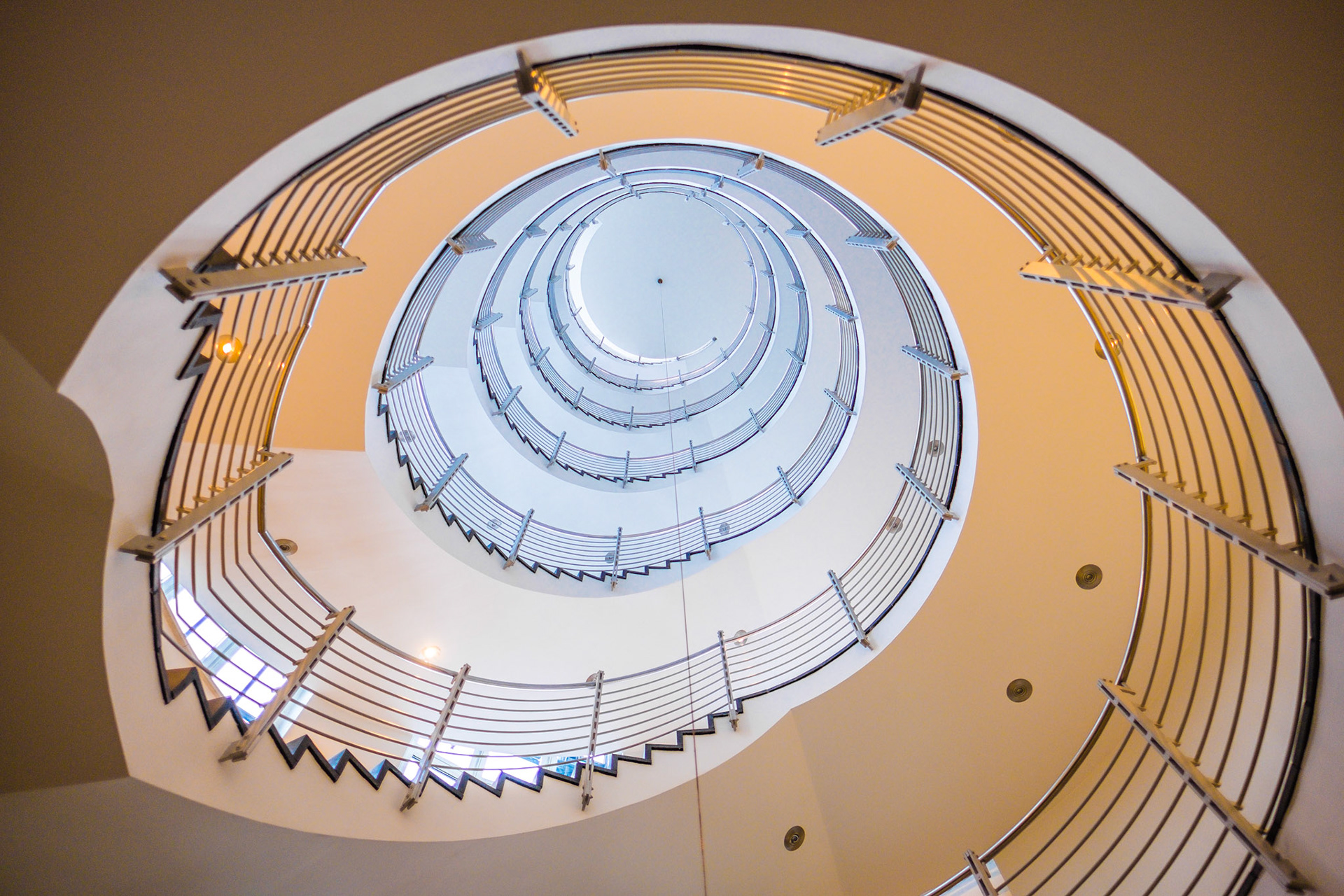 Its staircase contains a Foucault pendulum. The pendulum is named after French physicist Léon Foucault who conceived the setup as an experiment to demonstrate the Earth's rotation. The first public exhibition of a Foucault pendulum took place in February 1851 at the Paris Observatory using a 12m long pendulum. On March 26, 1851, Foucault showed a much larger version in the Panthéon using a 67m long pendulum and a 28kg heavy mass. With each oscillation, a tip at the end of the bob created a mark in a bed of sand on the floor.
Which brings us back to the second half of the 19th century, where we initially started !

An autumn week in and around Jenaz
October 2021

Surselva: on the path of Olgiati and Zumthor
April 2021

A journey to the origins of Switzerland
April 2022

Berlin: a weekend of architecture and history
September 2022
↑Back to Top