Every work of art is the child of its age and, in many cases, the mother of our emotions. It follows that each period of culture produces an art of its own which can never be repeated.
Wassily Kandinsky - Concerning the Spiritual in Art, 1911
With the new millennium, a new multimedia art has become very popular: immersive art experiences, digitally reproducing artworks by popular painters, animating and projecting them inside buildings in combination with a soundtrack. These multimedia installations let us experience the artist and its life in a very different way from a traditional museum visit. Instead of walking through museum corridors, we sit or even lay down in large beanbags and the paintings come to us through the projections. They have the ability to create huge virtual retrospectives of artists whose works belong to museums or private collections all over the world and that can only rarely be brought together. The soundtrack can add an additional dimension, transporting us further into the time period of the artwork's creation. At the same time, immersive art installations also aren't a replacement for a museum visit where we can see the artist's brushstrokes on the canvas up close and where we aren't paced by the projection and narration, being free to spend as much time in front of any given artwork as necessary and interesting for us. They are complementary forms of experiencing and learning about art.
Atelier des Lumières in Paris is among the pioneers in the immersive art space. Their first event "Gustav Klimt" and "Hundertwasser" in 2018 attracted over 1.2 million visitors. They use 140 projectors and 40 loudspeakers inside a former foundry building. Many other production companies now also create interactive experiences and  most major cities have probably at least one on show at any given time.
In Switzerland the multimedia company "Projektil", founded in 2008, produces these Art Shows. Two of them can be seen now: Viva Frida Kahlo in Lausanne and Klimt's Kuss in Zürich.
Viva Frida Kahlo
"Viva Frida Kahlo" offers an introduction into the world of the legendary Mexican painter, born in 1907. Visitors are guided by an original soundtrack and first-person narration through her life from her childhood in Mexico to her death at only 47 years old, passing through her illness, accident and relationship with painter Diego Rivera. Her artistic career is shown through the projection of many of her key paintings. This is all the more special since Frida Kahlo's work is still copyright protected and the designers hence had to first obtain the necessary rights. 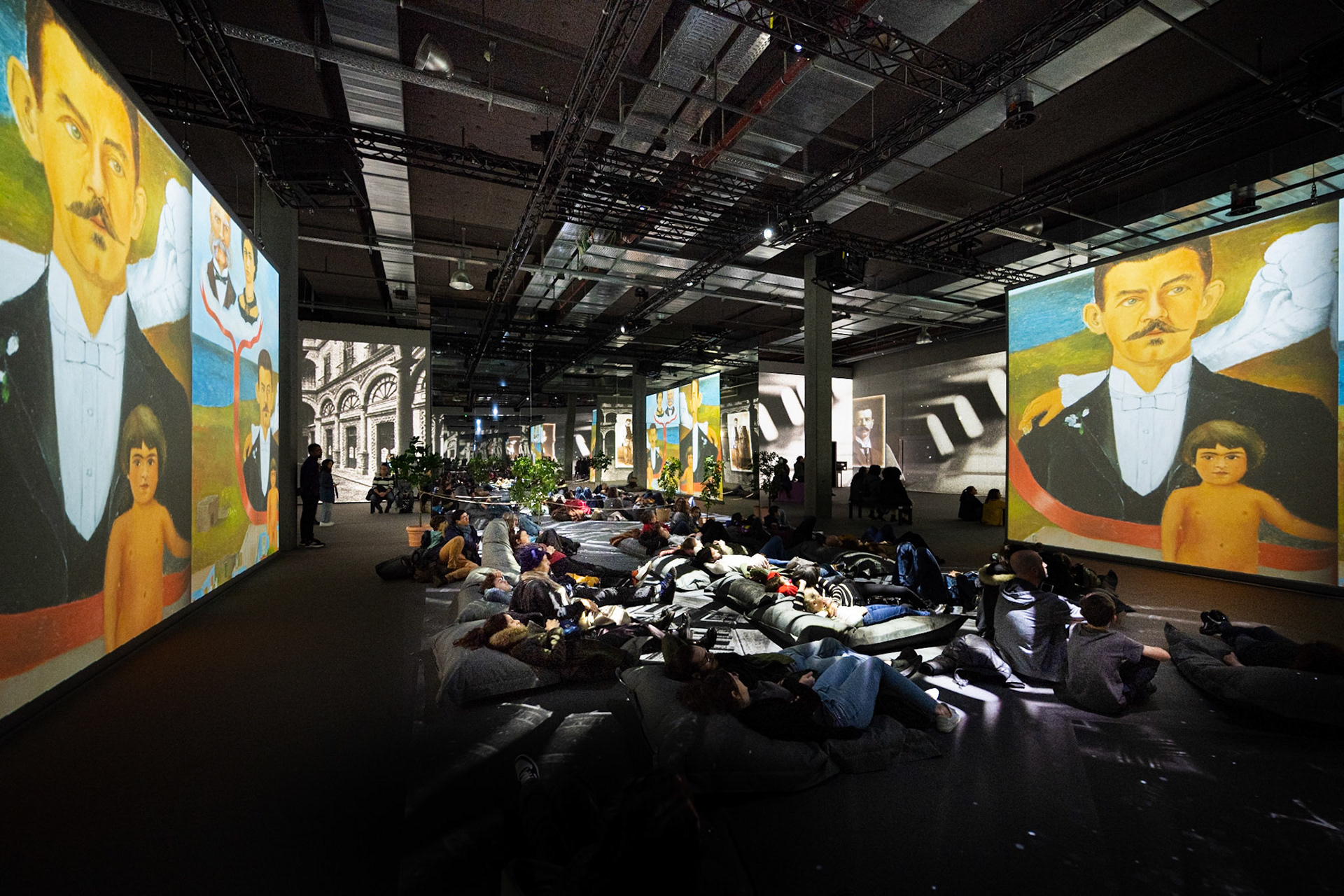 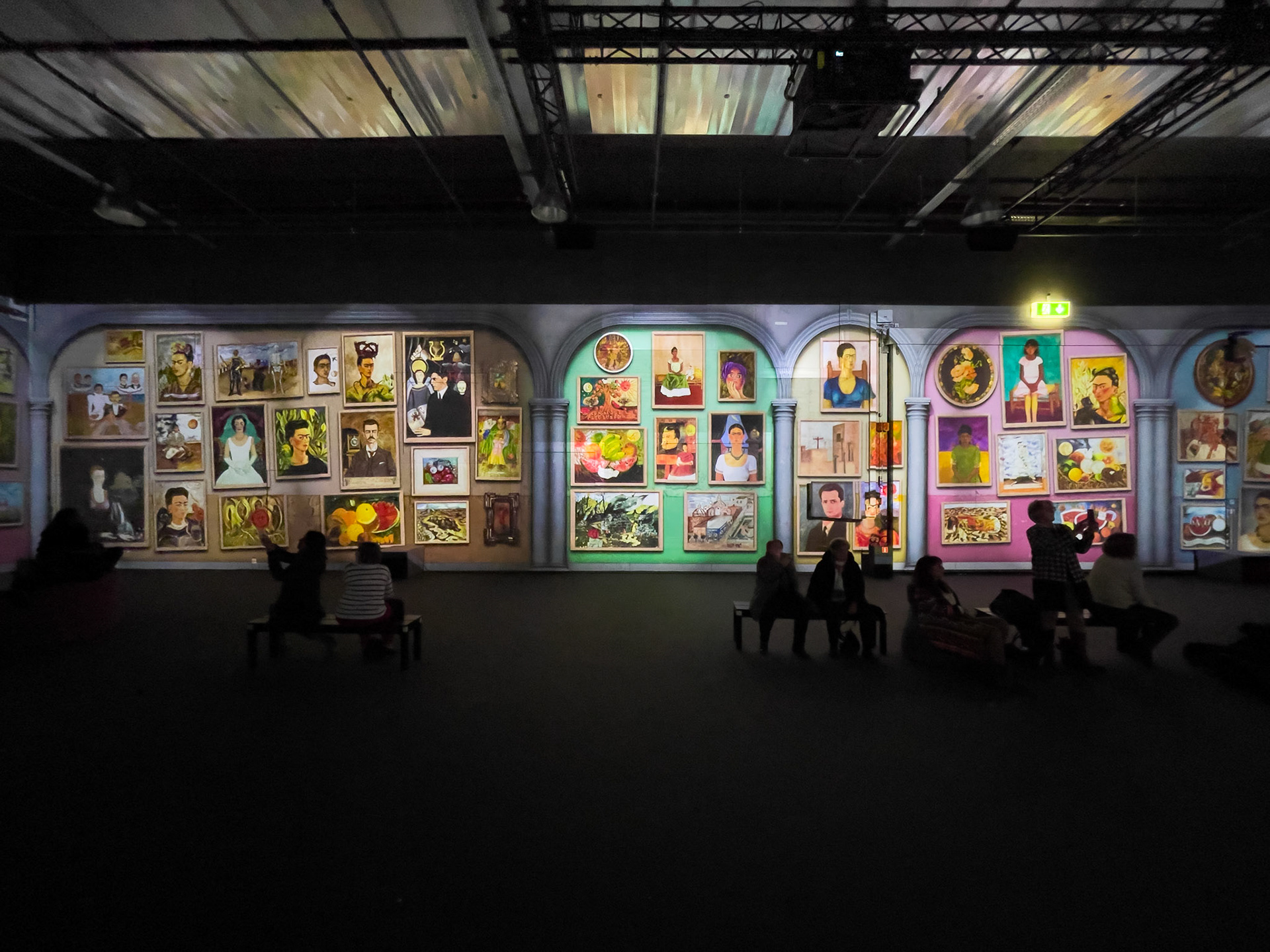 Initially created by Projektil for the MAAG Halle in Zürich, it was adapted for Lausanne. After the editing work in the studio in Zurich where the images had to be redesigned, the setup in Lausanne took about three weeks.
"Viva Frida Kahlo" can be visited in Lausanne's Beaulieu Convention Center until March 19, 2023. The first-person narration is in French and headphones can be rented to listen to the English or German version.
Klimt's Kuss - Spiel mit dem Feuer
"Klimt's Kuss - Spiel mit dem Feuer" shows many of Gustav Klimt's paintings of woman. The narration is a fictional dialog between a present-day art history student and fashion designer, Emilie Flöge, who was Klimt's life partner and muse. They discuss triumphs and scandals, as well as love affairs. The story reaches its zenith with the famous portrait "The Kiss", showing Emilie Flöge in an embrace with Gustav Klimt. 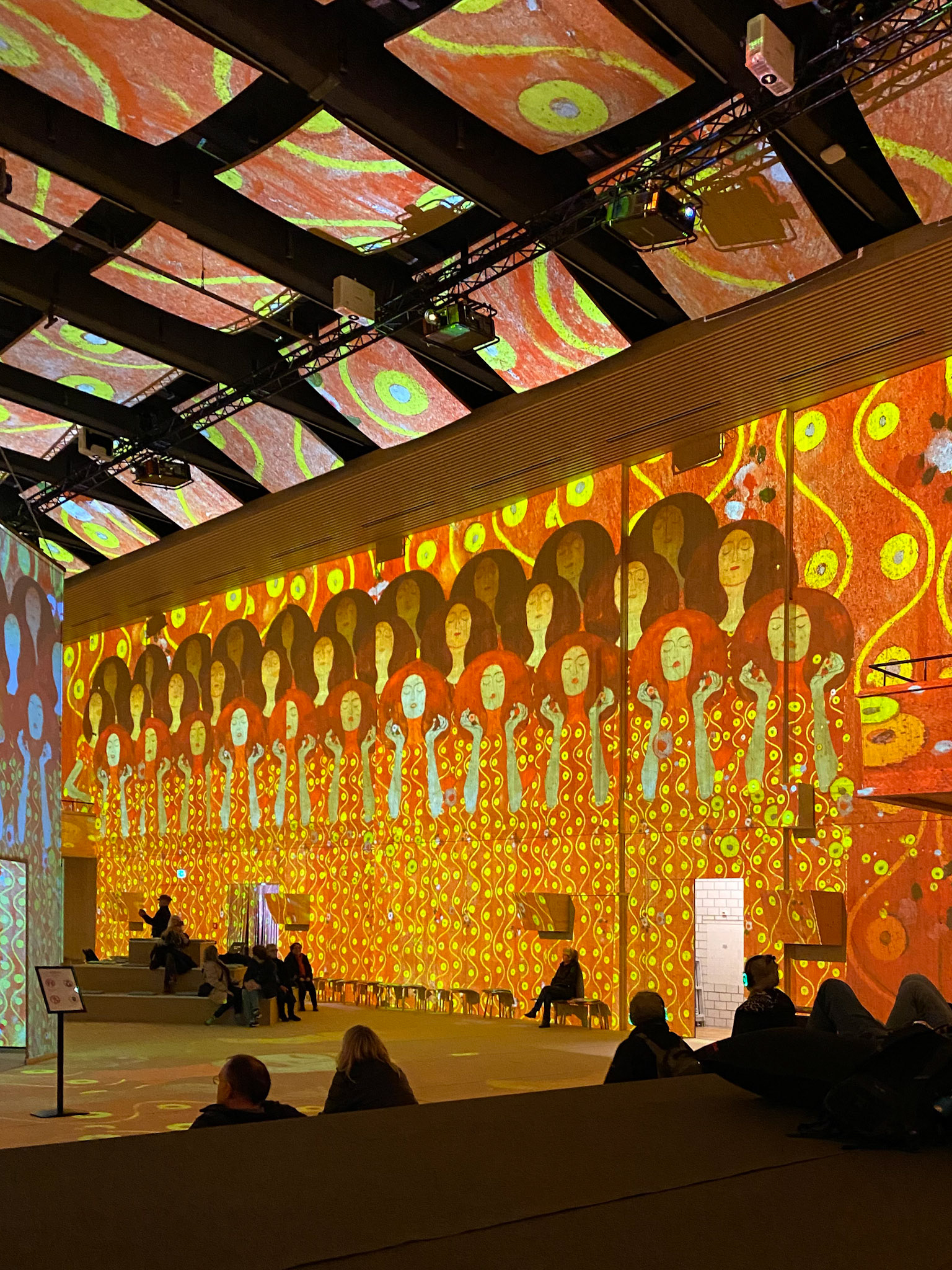 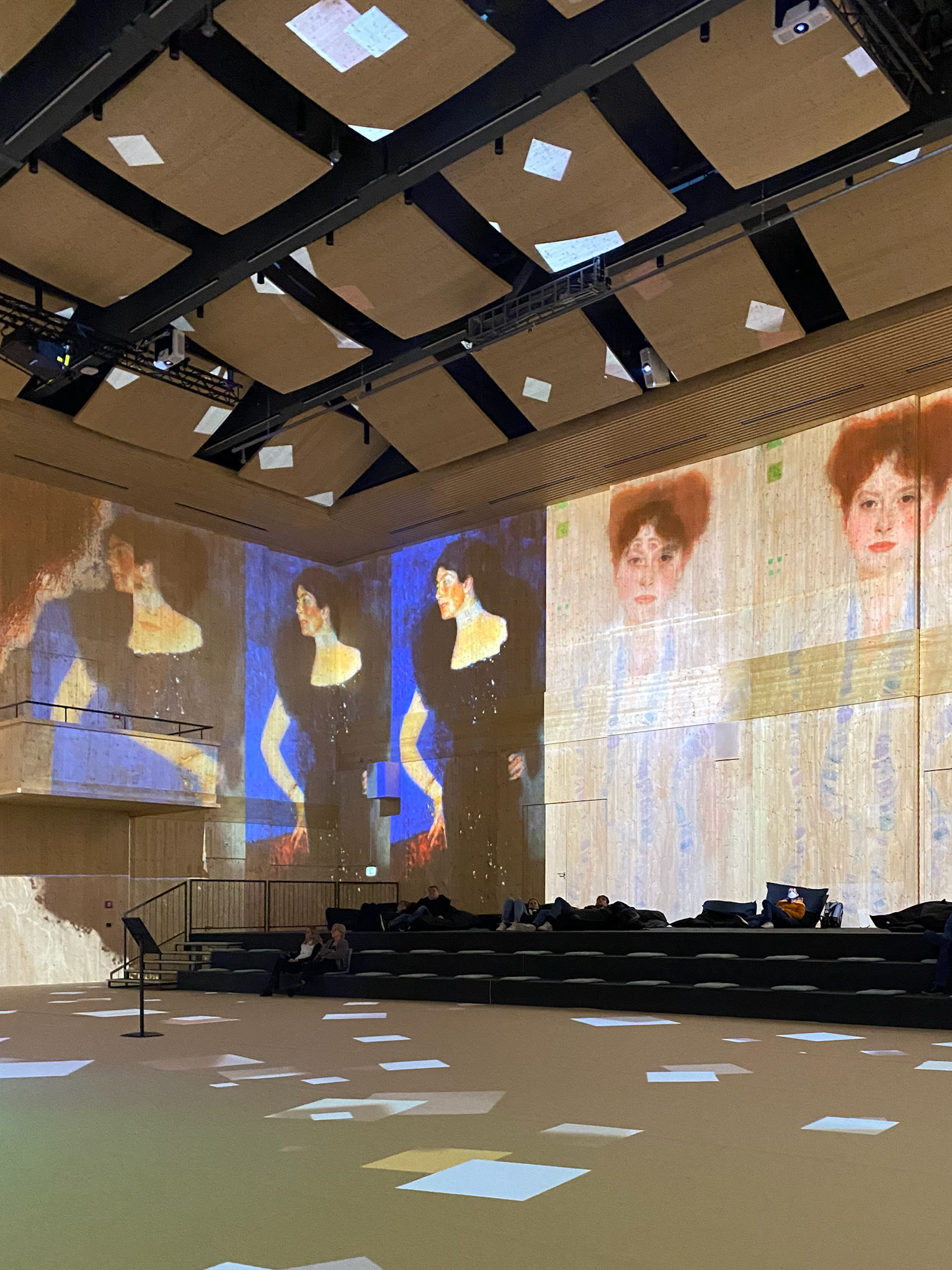 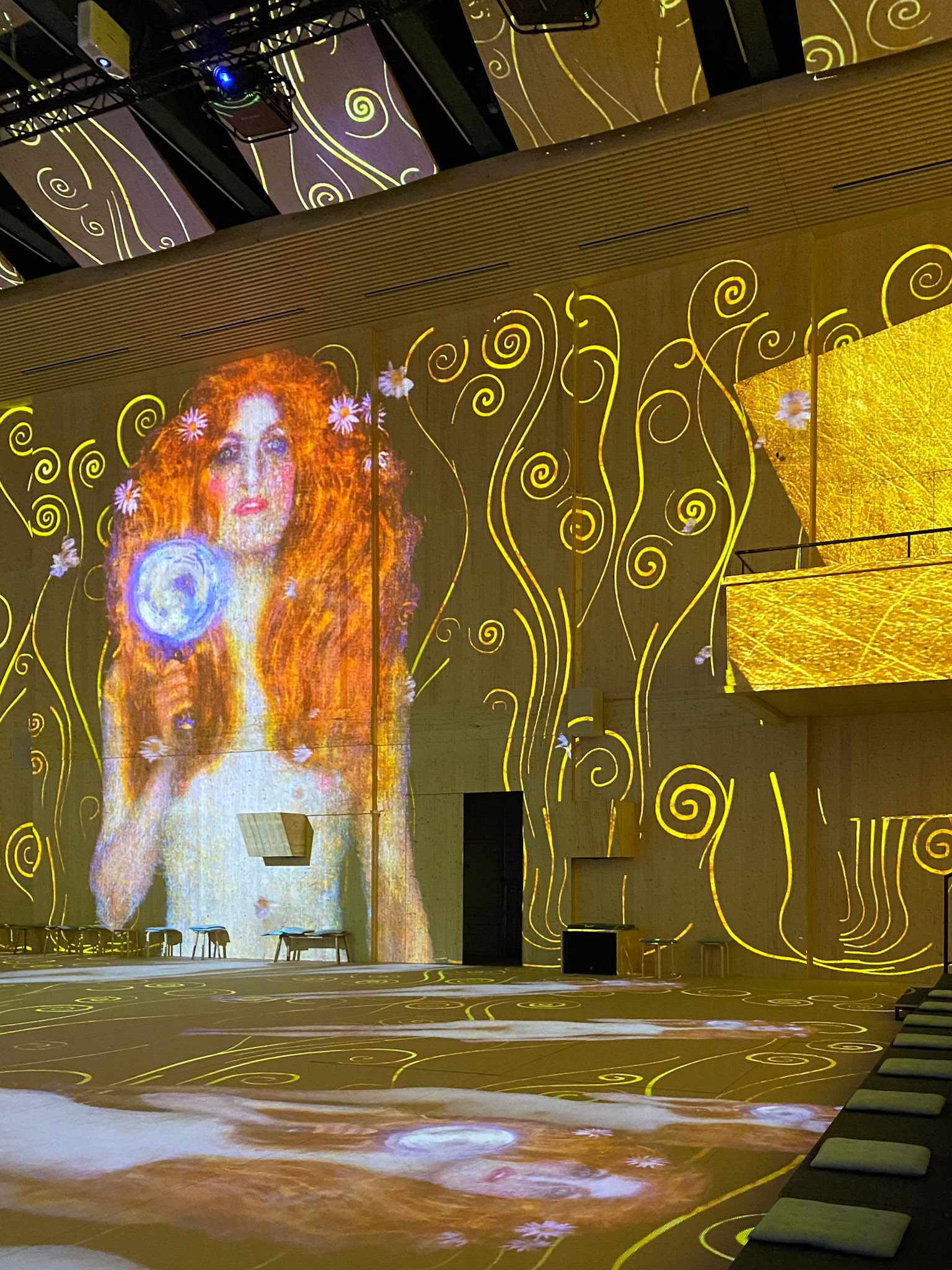 "Klimt's Kuss - Spiel mit dem Feuer" can be visited in Zürich's MAAG Halle until May 7, 2023. The narration is in German and headphones can be rented to listen to the English or French version.

MCBA in Lausanne - From Construction to Opening
January 2020

Photo Elysée and mudac - From Construction to Opening
June 2022

Swiss museums during lockdown
March 2021
↑Back to Top